Most of the time when I am on call for surgery, things are relatively quiet - such as a few cases over 24 hours. Not so this past 24 hours. We (the surgical resident, intern, and I) have had a number of cases, and an interesting variety: a perforated duodenal ulcer, an emergency tracheostomy on a man in his 30's with esophageal cancer that had blocked his airway, a 12 year old with his bowels obstructed from worms, and a 2 year old who swallowed a coin (see x-ray below). We also had 3 men who assaulted each other with hoes on the head, two of whom needed big lacerations closed while the other needed his skull elevated. We almost had to put a tracheostomy in a 2 month old, but she was successfully intubated. There was also a 3 year old who swallowed a nail (see x-ray), but we will wait to see if it makes it through (swallowed objects like nails usually do). We also assisted the OB team on an operation for an intra-abdominal pregnancy which was attached to the bowels. Then we did two operations (a wash-out and a bowel anastemosis) on a 5 year old girl who had bowel ischemia from sickle cell disease. 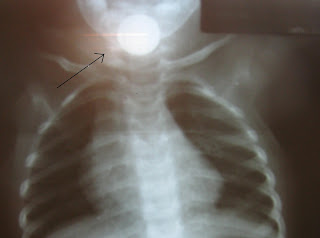 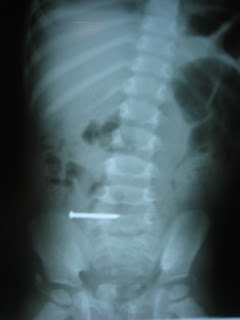 Anyway, my favorite part of the night was as we were closing the kid with the bowel obstruction from worms. I asked Elijah, my resident, whether he thought I should show the bowl full of worms to the family. He thought it would be a good idea as it would likely encourage them to go to their local clinic every 3 months and get the free de-worming medicine. If they did that, the worms wouldn't grow to such a population that they could cause an obstruction. 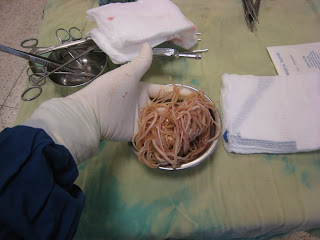 So I walked out to the waiting room with a bowl full of worms and called the family. In my broken Swahili I explained that when we did surgery, there was a blockage, and this is what we found - and I uncovered the bowl. They were quite shocked, and started chattering rapidly to each other in Kipsigis, the local language. As they were talking to each other, the Kipsigis nurse who was with me started giggling and then leaned over to me and said that this was the family of the patient who got the tracheostomy for the obstructing esophageal cancer!
Posted by Jason and Heather Fader at 12:17 PM

Thanks for sharing. May God bless your hands and words in His service

H-I-larious! Must have been a priceless expression on their faces

Thanks for sharing, Jason. May God continue to gift your hands and mind for His glory. Love ya, Linda S.

Worthy of the tribute, are each of you.

Praying for you daily.