Hope is a Gift

Several weeks ago, I was working through a series of questions that my publisher New Growth Press wanted me to answer as they work to promote Promises in the Dark.  They are questions about facing discouragement, feeling weak, and overcoming the fear of hoping.  Good questions that are very much in line with the content of my book.

It's hard for me to answer the questions, because I am, at this moment, having difficulty facing discouragement, feeling weak, and overcoming the fear of hoping.  Which just goes to show that being able to articulate your thoughts and put them on paper doesn't equal the end of the heart struggles.  My cadre of internal medicine patients at the hospital is having a hard run.  As I'm typing answers to these questions, my colleague texts me to tell me of the unexpected death of a young patient I saw just yesterday.

This is hard for me at the moment because of my patients, but it can be anything - family, friends, life, the world around us, anything - it can be hard to look at our world honestly and find the courage to hope.

The next question reads, "You write about times where you have been afraid to hope due to dire circumstances.  How did you overcome that fear in order to reach for God's promise of hope?"  Have I really done that?  If I have, then why can't I do it now?

In an effort to get some momentum, I start with some exposition on the subject:

My primary job is to care for the sick bodies of poor people in an underserved setting.  I often lose that battle, and because of that, I can be quite guarded in my hope.  "Hope deferred makes the heart sick," says Proverbs.  If someone's hope gets dashed every time they don't win the lottery, we would blame their expectations rather than the winning number.  Sometimes it feels like that for me.  Sometimes the odds don't favor hoping.

The crucial difference between my world and the lottery illustration is God's promise.  God has not promised me the lottery, but something far better.  He promises that he is always present, that he is always at work, that he is for me in my efforts to care for the poor and needy, and that he is making all things new.  We are not called to hope for the sake of optimism.  We are not called to hope based on the natural odds of the world around us.  Christians are called to hope because they believe that God's promises are true, and that he will actually act to fulfill them.  We "factor God in" to our circumstances, and as we do, we find reason for unexpected hope.

The next part draws me up short, because I know I haven't yet answered the part of the question that says "how do you overcome that fear in order to reach for God's promise of hope?"  My writing stutters.  I'm always struggling to hope, even now...  I don't know what to write.  My head has already said its piece, but my heart is finding it hard to trust in the very promises I just cited.

I'm sitting at my desk, looking out at my backyard.  Stuck.

My phone fires off a series of chimes, which probably means a message from a Burundian colleague, given the Burundian habit of chopping a message into multiple short texts.  I'm hoping it's not more bad news.

The message is from a medical-student-turned-colleague who worked at Kibuye for a while before going to work at our sister hospital in the capital city.  I had sent a 24 year old woman with persistent, terminal kidney failure down to see a kidney specialist, though I had no real hope that she would be able to go, or that it would make much difference if she did.  Her kidney disease was too severe (for medical folks, a Creatinine >25 mg/dl) and too persistent (a couple months).  It was shocking that she was still alive, but she didn't seem to have a curable problem.

At any rate, this colleague is texting to tell me that they decided to just hospitalize her and monitor her while giving her some fluids.  After a few weeks, they are now sending her home with basically normal kidneys.  He thought I'd want to know.

I'm shocked.  I'm struggling to hope, even now...  I look back at the half-finished thought on my computer screen.  I wrote that three minutes ago, and now my heart is filled with unexpected joy.

The timing of these events stuns me.  It feels like a brief moment of clarity.  I needed exactly what came.  I shift from staring out the window to looking instead at my stunned reflection.  My driving thought is "I will either live like God is actually, really at work invisibly in the world around me, or I won't.  What will I do?"

I continue the paragraph:

I'm struggling to hope, even now.  The struggle is not resolved, and the fear is not yet overcome.  But in my experience, hope is a gift - even an unlooked-for gift.  Just when I'm so afraid to hope, there is some unexpected goodness, some healing, some newness that teaches me again to hope.

Posted by The Drs. McLaughlin at 9:25 PM No comments:

Email ThisBlogThis!Share to TwitterShare to FacebookShare to Pinterest
Labels: beyond medicine

This past Tuesday afternoon marked the fourth week of English Club, a new initiative which was the brainchild of Jess Cropsey. The idea behind English Club is to get to know our neighbours better by serving and building relationships with kids in the community. 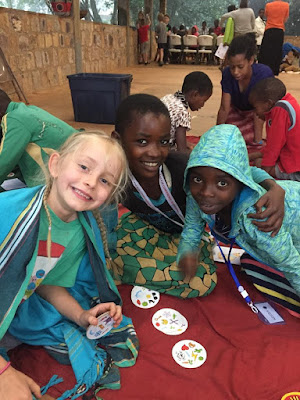 Each Tuesday, forty-five kids from Kibuye come along with Madame Frederique and Madame Therèse, two teachers from the local Burundian school, and meet several adults and kids from our team in the large pavilion at the centre of the compound. From 3:30-4:30 they rotate through four stations, each fifteen minutes long. There is a colouring station, a reading station with picture books from the school, a conversation station, and a games station. The children are divided into groups based on age and the kids from our team help out with the kids in (or close to) their age group. The ages range from about six to twelve. 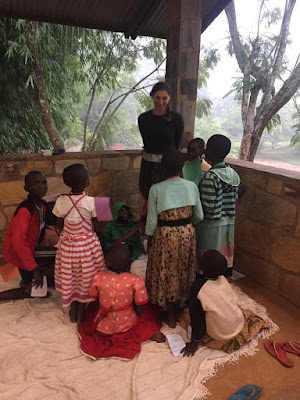 I lead the conversation station. So far, it seems to be going well! After learning basic English greetings, we have been working on some simple verbs (run, sit, jump) and colours. Last week we made bracelets with a bead of each colour that we have learned about, which was a hit with the kids. My Kirundi is minimal, but Madame Therèse and Madame Frederique are there to help me give instructions when needed. Though I hope that learning some English will be a blessing to the kids (it is a useful language to know for business and work), mostly I hope that this club will be an opportunity to get to know them a little bit. It has been a goal of mine to learn all of the children's names and it has been a blessing to begin to see them around the community as I walk up to the hospital or through the village. Many are children of people who work for the team or the hospital, and it has been meaningful to connect with parents more through getting to know their kids.

One of the best parts is seeing many of the kids from the team interacting with kids from the community. Susan tells the team kids every Tuesday before the club starts that the goal is to "make a new friend" and, though relationships take time, through positive initiatives like this, slowly they are being built. 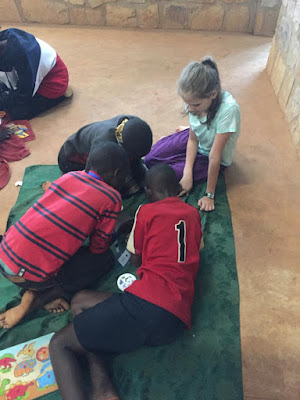 Posted by Alexis at 6:41 PM No comments: 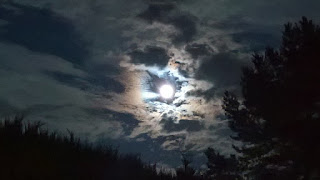 You would think that after (more or less) 10 years of practicing medicine overseas, nothing would faze me anymore.  Seen it all, done it all.  There's something to be said for that...I rarely get nervous about OR cases anymore, and I have more and more anecdotal stories to support my (lack of) evidence for why I come up with a treatment plan.  Yes, now I'm that doctor!  Still, at least once a week or so my colleagues and I gather around and one of us will assert, "I've never seen THAT before."  Usually it's some sort of weird and bizarre medical pathology that we can't figure out.

But recently, I also had an experience that produced no small amount of stress in my life.  Surprisingly, it was just a normal pregnancy and what promised to be a relatively straightforward delivery.  A couple from the capital city came and wanted to deliver here at Kibuye.  I haven't managed a normal straightforward pregnancy and delivery in years.  Of course that's not to say I can't do it, but from the moment they decided to come up here, months in advance, a little seed of fear and doubt planted itself in the back of my brain.  Ten years of bad outcomes started floating up to the surface of my consciousness.  The weight and burden of responsibility fell heavy on my shoulders.  In short, I mistakenly thought that the outcome was totally dependent on...me.

The day arrived.  The baby looked great on ultrasound and monitoring.  Labor was moving along.  And yet I couldn't eat.  I couldn't focus on anything else.  There were a million scenarios and contingency plans going around in my brain.

That very morning, I had been reading from Psalm 37 in Tim Keller's "The Songs of Jesus."  Psalm 37 starts out:  "Do not fret."  Keller's commentary followed with:


"Fretting is a common activity of our age.  It is composed of worry, resentment, jealousy, and self-pity.  It is dominant online.  It chews us up inside while accomplishing nothing.  David gives us three practical remedies....look forward....look upward...get busy with the things that must be done--do good."

The words, although apropos for my day, didn't sink in until quite a bit later.  I was worrying about things I couldn't control and wasn't responsible for.  Yes, I could do my job and do it well, but ultimately God was in control of this situation.  Worry was chewing me up, and accomplishing nothing.

Well, to make a long story short, everything was fine.  The baby came so fast in the end that my nurse delivered her practically on the floor of the delivery room.  Everyone was happy and healthy.  I walked home after dark with the moon peeking through the clouds, the air cool and fresh after a rain, and breathed deeply in thanksgiving.  I thought back to Psalm 37.  Looking forward...this world is not the end, and our stories are not finished yet.  And what lies ahead is far better than what has already happened.  Looking upward...to the God who knows our hurts and fears and not only welcomes our true feelings but loves us just the same.  And finally, doing good.  For me, I am realizing that inside my brain, where I process and reprocess everything, can be a dangerous place.  Sitting on my bed ruminating about my latest problem helps nothing.  Getting up and thanking God for his presence and his provision need to be my first step, redirecting fretting to praise.  "Be still before the Lord and wait patiently for him."  --Psalm 37:7