One World Futbols are a huge hit here at Kibuye.  These ultra-durable soccer balls are made by a company with a mission to give them away in places like Kibuye.  A young patient of Jason's, pictured below after several operations on his left leg, is forever changed and thankful.  One World Futbol's website published the story. You can click here to see the short story of this remarkable boy's experience with Kibuye Hospital and a One World Futbol. 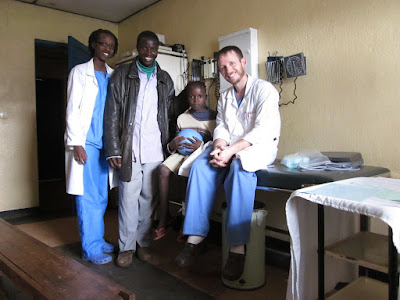 Posted by Jason and Heather Fader at 5:15 AM 1 comment: 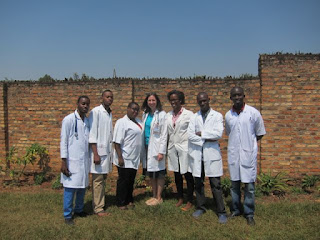 Sad to say goodbye to this great group of peds interns who have been working with me for the past 2 months. They have certainly made my job easier as they have worked hard, studied diligently, and cared for patients compassionately. And I was especially proud of them today as they rose to the challenge of teaching nutrition to our malnutrition service. Fifty to seventy patients continue to come to the hospital twice per week for our outpatient malnutrition program. These children suffer from hair loss, swelling, apathy, skin changes, and other evidence of both acute and chronic malnutrition. And in this country with extreme poverty and a falling economy due to the political situation, it’s hard to know how to teach the mothers about foods that are both nutritious and affordable. Most of the medical students grew up in the city in more affluent families, so it can sometimes be difficult for them to relate to our rural, impoverished patient population. But they related admirably today. They had previously researched what foods were available in the community and for what price and then they asked questions while they taught the mothers about the foods included in a balanced diet. Protein is the hardest food for these patients to find as was confirmed today. Only two or three mothers raised their hand when asked if they could buy eggs for their children (eggs cost 10 cents each) and few had access to milk. But many could buy the tiny salted fish that come from Lake Tanganyika, so that was helpful to discover. Peanuts are also readily available. The mothers asked questions as well such as whether to add salt during or after cooking or what kind of oil to use. It was great to see them engaged and responsive to the presentation. I do hope for more for these precious patients - more food, more education, more growth, more opportunities - but I’m thankful today for the hope for the future reflected in the medical students as they taught, learned, and cared thoughtfully in a challenging situation. 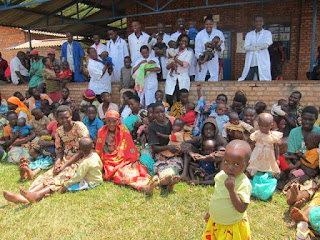 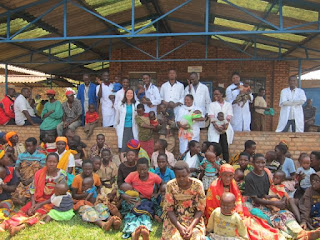 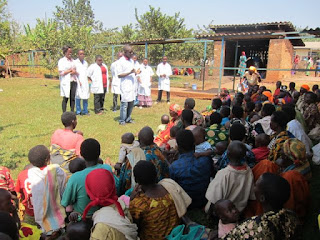 Saturday, July 18, marked a historic day for the McCropders.  For the first time ever, our team added a teammate through marriage!  (usually we just grow by having kids)  Carlan married Michelle Rose, a sweet piano teacher from southern California who had come out to visit us (him) at Kibuye last January.  We are all so excited for both of them.  Flying back to the US from Burundi for the wedding would have been rather cost prohibitive, but fortunately there were a number of us in the US on HMA or vacation, so there was a nice turnout at the wedding.  It was great to have a Burundi reunion with the Sunds, Bonds, Cropseys, McLaughlins, and Abraham.

Not to be outdone, the half of our team still at Kibuye sent their own greetings.  They posted a bunch of photos on Facebook of all the many Burundians and muzungu who held up a "congratulations" poster for Carlan and Michelle.  A collage of those photos was featured in the slide show playing behind the bride and groom's table.

AND the Kibuye folks made their own "wedding cake" to celebrate! :)  They were probably eating it a few hours before the bride walked down the aisle. 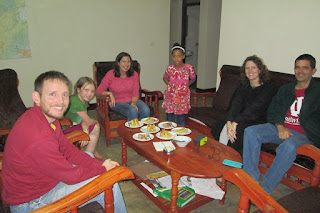 We will miss Carlan (and Michelle) for these next months as they enjoy married life and reapply to Serge.  They will hopefully be joining us again at Kibuye, but not for awhile.  In the meantime, many prayers and blessings go out to the new couple!

The Beauty of Africa

I think what surprises so many people when we talk about Burundi, or when they arrive at Kibuye after hours of travel to visit us, is how beautiful our home is.  Seventy degrees, almost all the time.  Green rolling hills, lush fields, banana trees, colorful flowers.  The people we live and work with are also beautiful.  Not just physical beauty, but the beauty of surviving and prevailing and finding joy in sometimes less than joyful circumstances.  The old lady who shows a smile with no teeth.  Shy, rag-clad children, giggling as they roll an old tire along the ground with a stick.  A church packed full of myriads of brightly colored dresses on its faithful attenders.

It's a balance for us, one we have tried hard to strike, between showing the immense poverty and sadness and need all around us, without giving a false impression that there is only tragedy, only grief, only darkness all around.  It's what is easier to write about, sometimes.  But I came across an article on Facebook the other day, how Africans are fighting back against the stereotypical image of Africa as a famine stricken desert full of empty eyed, gaunt orphans.  Real Africans from a variety of countries are sharing images of the Africa that they know, an Africa most are surprised to find exists. I can't recommend the website per se (so if you visit, know that there are some bizarro links along the top and sides) but the article is great.   Click here if you're interested.

May we never show poverty for shock value's sake.  May we remember each person whose story we share...a person who is not just sick or broken, but who is a child of God that usually has a family, friends, a home, a past, and a future.  Burundi is a beautiful place.  Complex, but beautiful, and in the midst of the elections and evacuations, deaths and sicknesses and hospital stories. we hope to continue to be able to share that with you. 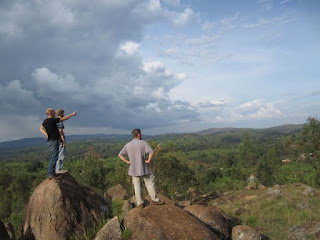 Posted by The Drs. McLaughlin at 8:11 AM No comments:

Yesterday marked 53 years of independence for the countries of Burundi and Rwanda from Belgium. Burundi remained a monarchy for the first four years of independence and then was declared a republic on Nov 28, 1966. A rocky history since then has been marked by coups d'état, assassinations, ethnic tension, and civil war. But life has been relatively peaceful for the last ten years, and, in our team's almost two years here, we've seen hope and courage in the faces of our Burundian students, colleagues, and patients even as they face African realities. Unfortunately, though, the last two months have been difficult for everyone as Burundi succumbs again to political tension and crisis. So it was a joy yesterday to see Burundians at Kibuye celebrating independence together - smiling and laughing and enjoying the day regardless of tribal or political affiliations. The future remains uncertain for this beautiful country, but we are thankful to be here and a part of this community even at such a time as this. 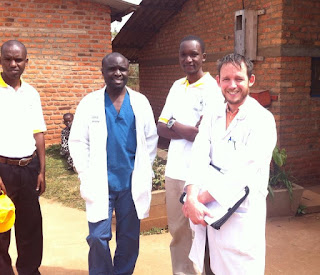 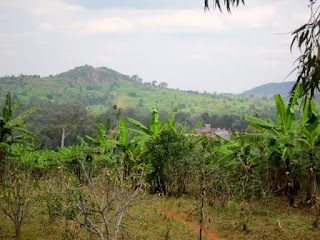 Aerial view of Kibuye - blue and red roofs in the center 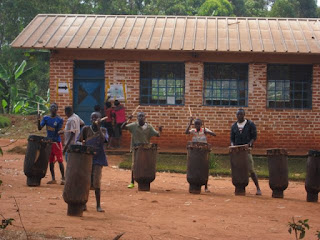 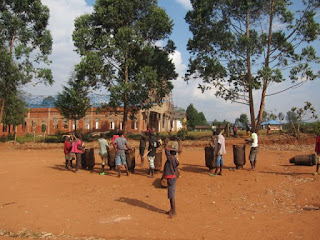 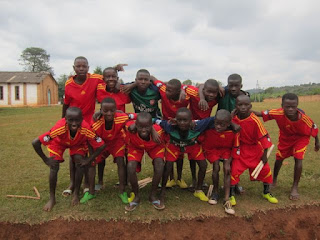 Primary school drummers in their uniforms on Independence Day 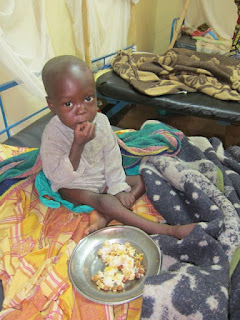 Pascal finally went home after 49 days in the hospital miraculously improved from severe acute malnutrition. We considered sending him home with palliative care at one point but then (thanks to Dr. Randy Bond and to Jason) we discovered he had a large congenital pancreatic cyst which was contributing to his severe malnutrition. After the operation he continued to be extremely sick with various complications, but last week he finally began improving. He started to shake our hands and take the therapeutic milk and Plumpy Nut (high calorie peanut butter). He stopped crying all the time and began to play. The students, nurses, and I were thrilled to see him finally recover and begin to act like a healthy three year old.

Both of the above patients come from extremely impoverished families and thus their bills were paid by the Needy Patient Fund. Thank you to all those who contribute to that! 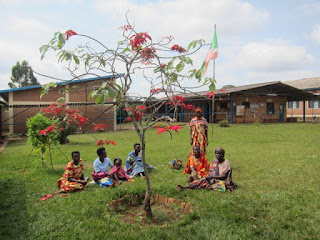 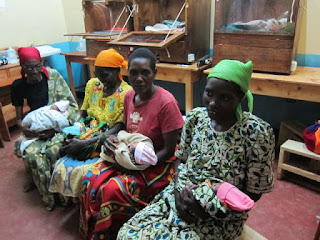 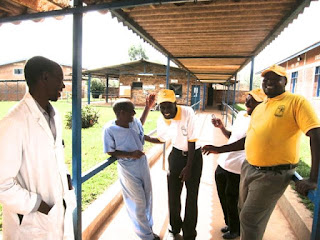 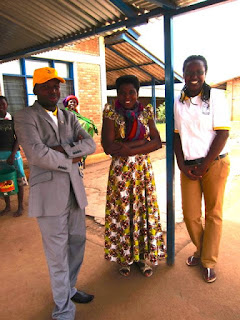 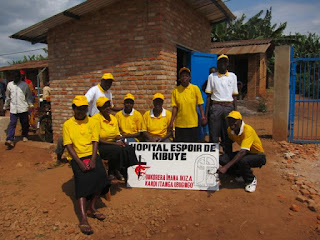 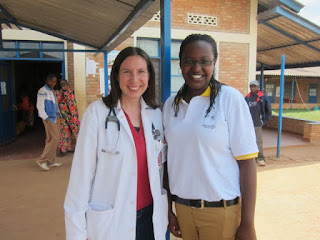 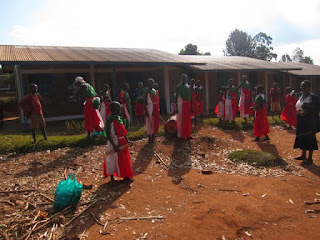 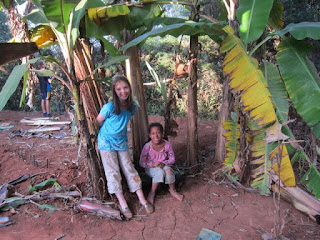 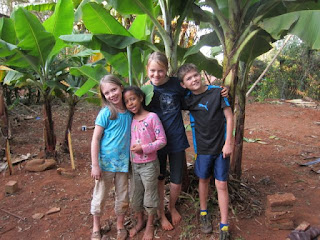 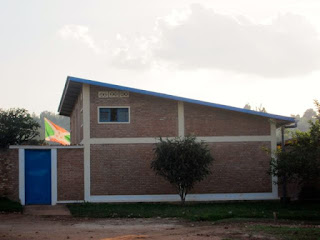 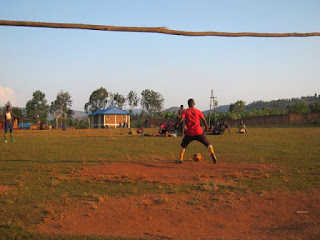 And no celebration is complete without a sunset game of football!

ISAIAH 58: 6-9 “Is not this the kind of fasting I have chosen: to loose the chains of injustice and untie the cords of the yoke, to set the oppressed free and break every yoke? Is it not to share your food with the hungry and to provide the poor wanderer with shelter—when you see the naked, to clothe them, and not to turn away from your own flesh and blood? Then your light will break forth like the dawn, and your healing will quickly appear; then your righteousness will go before you, and the glory of the Lord will be your rear guard. Then you will call, and the Lord will answer; you will cry for help, and he will say: Here am I."
Posted by Alyssa at 10:01 AM 1 comment: