A week ago, all McCropders save John came together, along with a number of other Post-Residents in Bristol, TN, at the CMDA Medical Mission Conference. It was a great time, and there was a lot of food for thoughts, which we'll try to share over the next few weeks.

It was also a great chance to see each other in action, and I'd like to point out a couple of quintessential missions personality traits, exhibited by my friends. As far as I can tell, Adventurousness and Thriftiness may be considered less "spiritual" quailities, but still among the most important in the missionary life.

The medal for Adenturousness goes to my lovely wife Rachel, who (with me) weighed the pros and cons of a 9-hour van ride to Tennessee at 38 weeks gestation, and decided it was still worth it. So we packed a car seat and some baby clothes, and just to be ready for anything, she also brought a pair of sterile gloves and a pair of cord clamps. Thankfully, this all went unheeded, and we unpacked it all back in Michigan at the close of the weekend.

The Thriftiness award went to Jason. After an initial admonition to save our disposable cups, to help cost-savings at CMDA, Jason showed up the next morning with the styrofoam cup from his hotel coffee-maker. As impressive as this was, I learned an older story this past weekend that makes Jason's thrift certainly subordinate to Heather's. Apparently, Heather trained for a marathon several years ago in Chicago, but in order to avoid the somewhat hefty fee, she went out one Saturday by herself, and ran her own self-designed 26-mile course. Where does one get the will-power to finish that kind of race with no external expectations and no one cheering you on? I don't know. You had better ask Heather.
Posted by The Drs. McLaughlin at 2:41 PM 2 comments:

The story is one of the most amazing incidents I've heard recorded in years. I thought of just posting the link, but decided in favor of reproducing the whole story, because of its certainty not to disappoint. A few thoughts:

1. I hope these snakes prefer the coastal lowlands, and I'd be fine never meeting one in the wild.
2. I hear they subsequently found the snake again, but that reassures me only a little.
3. I love how this primal epic struggle in Africa features the use of a mobile phone.
4. Quote of the day: "I had to bite it." Awesome.

A Kenyan man bit a python which wrapped him in its coils and dragged him up a tree during a fierce three-hour struggle, police have told the BBC. The serpent seized farm worker Ben Nyaumbe in the Malindi area of Kenya's Indian Ocean coast at the weekend. Mr Nyaumbe bit the snake on the tip of the tail during the exhausting battle in the village of Sabaki. Police rescued Mr Nyaumbe and captured the 13ft (4m) reptile, before taking it to a sanctuary, but it later escaped.

The victim told police he managed to reach his mobile phone from his pocket to raise the alarm when the python momentarily eased its grip after hauling him up a tree on Saturday evening.

Mr Nyaumbe used his shirt to smother the snake's head and prevent it from swallowing him. His employer arrived with police and villagers, who tied the python with a rope and pulled them both down from the tree with a thud.

Peter Katam, superintendent of police in Malindi district, told the BBC News website: "Two officers on patrol were called and they found this man was struggling with a snake on a tree.
"The snake had coiled his hands and was trying to swallow him but he struggled very hard. The officers and villagers managed to rescue him and he was freed. He himself was injured on the lower lip of the mouth - it was bleeding a little bit - as the tip of the snake's tail was sharp when he said he bit it."

Mr Nyaumbe told the Daily Nation newspaper how he resorted to desperate measures after the python, which had apparently been hunting livestock, encircled his upper body in its coils. "I stepped on a spongy thing on the ground and suddenly my leg was entangled with the body of a huge python," he said. "I had to bite it."

Supt Katam told the BBC the officers had wanted to shoot the snake but could not do so for fearing of injuring Mr Nyaumbe. "If it wasn't for the villagers and officers who helped him, he would have been swallowed by the snake over the Easter holiday," said Supt Katam. He added: "It's very mysterious, this ability to lift the man onto the tree. I've never heard of this before."
The police officer said they took the snake to a sanctuary in Malindi town but it escaped overnight, probably from a gap under the door in the room where it was kept.

"We are still seriously looking for the snake," said Supt Katam. "We want to arrest the snake because any one of us could fall a victim."
Posted by The Drs. McLaughlin at 10:16 AM 1 comment:

Email ThisBlogThis!Share to TwitterShare to FacebookShare to Pinterest
Labels: Kenya

A New Lens For The World

Some of you may have previously seen a map of the world with the south pole at the top, and can appreciate how a restructured map can contribute to a paradigm shift. This first map gives the size of the country based not on its square mileage, but rather its population. Note the size of Australia or Greenland, compared to Bangladesh. (click on either map to see enlarged image) 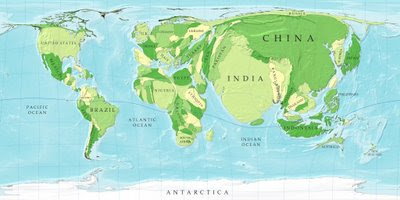 This second map scales the size of the country to their share of the physicians of the world. This one kind of speaks for itself in the context of this blog.

Worldmapper and Strange Maps are the origins of these images, for any cartography love among you.