As noted previously, the McCropders consists of three families and 2 children, for a total of 8 individuals. Recent events have pretty dramatically increased that to 11 individuals.

As many know, little Elise Cropsey is set to have a baby brother in the early part of the next calendar year. After an enthusiastic conversation with a Swaziland ophthalmologist a few months ago, John has taken to calling his new son "The Swaz". Of course, John is kidding (we think), but this no longer matters, as the rest of us will most certainly call this kid The Swaz for the rest of his childhood. In fact, the "the" part must also stay, as in "Hey The Swaz, come here for a minute."

The McLaughlin family will be increasing by 50% with the coming of a new baby in late April. We may choose to save the more flamboyant baby names for later children, but we are nonetheless very excited.

And Anna Fader will be getting up close and personal with Amharic culture, as the Faders adopt a little girl from Ethiopia, some time between now and the time we depart for Africa. We are blessed and we thank God, who has filled us to overflowing.
Posted by The Drs. McLaughlin at 7:23 PM 2 comments:

Email ThisBlogThis!Share to TwitterShare to FacebookShare to Pinterest
Labels: updates

Sharing with the Studs

Last week, one of the national medical student organizations was holding "Primary Care Week" to spotlight some of the disparities and needs in primary care. As part of this, some medical students at the U of M were holding a series of lunchtime talks. One was centered on international medicine, and I was invited to speak.

It was a great opportunity, and fairly well attended by the medical students (or "studs"), with whom international medicine is a very popular topic. For my part, I talked a little about what our plans are for the future, as well as my past experiences abroad both as a medical student and as a resident.

Afterwards, multiple students came up and asked us about a number of topics. The motivations towards international work are various, and for the most part, admirable. The enthusiasm seems to be highest earlier on in medical education, when principles shine bright, and seeming problems with practicalities seem easy to overcome. Given that the options entertained in Africa for us now all have to do with education of Africans, the way to most effectively guide students and residents remains a particularly important topic.
Posted by The Drs. McLaughlin at 2:30 PM No comments: 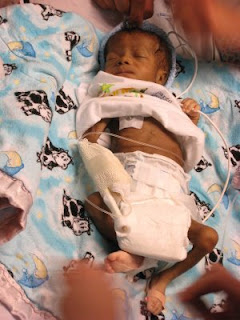 The most poignant and thought-provoking case I experienced while in Liberia was that of the 6 week old boy pictured here. He was finally brought to the Mercyship after a one week history of a painful lump in his groin accompanied by persistent vomiting and lethargy. It turned out to be a strangulated hernia (intestines which died as a result of getting stuck in a defect in the abdominal wall). When he came to us he was severely dehydrated, weighing only 3 pounds! He was too sick to even survive an operation, so we did our best to resuscitate him. In the end, we could not save him, and he died in his father's arms the following day. The father's faith challenged me, as through tears he acknowledged God's sovereignty saying, "God gives and God takes away." This was also Job's response to losing his entire household and all his children as a result of Satan testing his devotion to God in Job 1:21.

While I know that God can, and will, ultimately bring good out of this situation (Romans 8:28), I am also convinced that God did not design for this child to die for lack of a simple surgical procedure. So how is it that this baby died? The simplest answer is that we live in a fallen world, where death is as certain as life. All the same, God has chosen to redeem this fallen world through his church (Ephesians 2:10). What a privilege to be a part of bringing about the Kingdom of God on this earth! Though everything will not be made completely new until Jesus comes again, until then, I hope to be found redeeming the world, one hernia at a time.
Posted by Jason and Heather Fader at 11:00 AM 1 comment:

The Tompkins family at Mukinge Hospital, Zambia, who are currently part of the Post-Residency Training Program (which we will enter next year), have a great comment on one of my favorite Africa cross-culture-isms. Their blog is here. Enjoy:

"While we were sitting outside at Violet’s house, several kids came around to stare at the funny visitors. Some of the kids were Violet’s grandchildren or nieces/nephews and some were just neighbors. Violet was commenting on the fact that Zachary is as tall as her 5 year old granddaughter and then she said that it made good sense that he was tall because “his father is tall and fat, and his mother is tall and fat.” She said this complete with hand motions demonstrating the enormity of my body habitus. Well excuse me, but Elissa is with child (and looks beautiful by the way) and I’m down over 20lbs in the last 3 months. So I’m not sure if by fat she meant “healthy” or just “fat”, and I didn’t bother to ask. We laughed and I know she didn’t mean anything hurtful but, speaking only for myself, I know I’m quite huge compared to most folks in the village. However, by my calculations, if I continue to drop pounds at this rate, I’ll weigh about 13 lbs when we return home in 2 years. And in 6wks Elissa is going to drop 30lbs pretty quickly. So there you go…there is hope for us after all."
Posted by The Drs. McLaughlin at 4:18 AM No comments: