Given our geographical disparities, we have taken to meeting ever so often for a video conference via Skype in a session aptly abbreviated "MTOS" - McCropders Talking Over Skype. Last Friday was the most recent of these, with all McCropders in attendance, with a brief reprieve by Heather to put Anna to bed, and the Parents McLaughlin as guest observers.

A number of things were discussed, mostly centered around 3 ideas:
1. The status of our current applications with different agencies we are exploring that would send us to Africa.
2. The relative pros and cons of the two main options: namely, going to train for 2 years in Africa, then finding a long-term agency and location vs. attempting to find a longterm agency on the front end and having the training abbreviated to some degree. This will be discussed more in depth when the Cropseys spend a week in Michigan in early June.
3. The agenda for the said visit from the Cropseys, in which we will gather to meet with a couple different organizations.

This was all done in the subtext of friendship and banter that gives our lives its true color. Thus the following 3 things were also discussed:
1. McCropders Summit 2008 in a farm house in Kentucky, at the Global Health Missions Conference. Man, we're psyched.
2. Heather and Eric strangely have the exact same birthday in early June whilst the Cropseys sojourn with us, and thus there will be celebration, food, and Catan to commemorate what will likely be the first of decades of joint Heather/Eric birthday celebrations.
3. John Cropsey inner desires: "I've always dreamed of becoming a jungle bunny." That's right, friends: Jungle. Bunny.
Posted by The Drs. McLaughlin at 8:07 PM No comments:

The miniseries at Knox Presbyterian goes on, and last week, the venerable Dr. Robert Chang, hospitalist extraordinnaire, gave a rockin' talk on what he's learned from his work at the hospital. And he did so on a minimal night's sleep, having just come back from a Honduran hospital early in the a.m. He's in internal medicine, and likes these long, sleepless runs.

There were a lot of great points that he made, but I'll focus on one. There's an old testament story (2 Sam 12) that I've heard for many years. King David, after committing adultery with the wife of one of his soldiers and getting her pregnant, he indirectly murders the husband and marries the woman himself. Through the prophet Nathan, David learns that God is going to punish his actions by the baby dying. That such a renowned hero of the Bible as David was guilty of such heinous actions, and that God took the life of the innocent, are both parts of the story that deserve long conversations not to be found here. 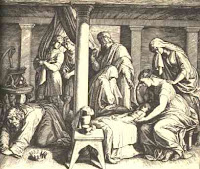 Here's the focal point: David hears this, and fasts and prays and lays prostrate on the ground for days and days, imploring God to change his mind. He was so desparate that, when the infant did die, his men were afraid to tell him this news, not knowing what he might do. But he senses their hesitation, and they tell him the truth. He gets up, bathes, changes clothes, goes and worships in the temple, and then eats. They ask him how he could act like this. He answered, "While the child was still alive, I fasted and wept. I thought, 'Who knows? The LORD may be gracious to me and let the child live.' But now that he is dead, why should I fast? Can I bring him back again? I will go to him, but he will not return to me."

Here is a solemn model for the physician. Ardent striving to save, ardent sacrifice on behalf of the sick and dying that we love. And then, peaceful recognition of the limits of our efforts. Acceptance, and the ability to move on and continue to live as God desires. We sense this tension in which we live. Robert, thanks for using this illustration to acknowledge the tension and instruct in the midst of it.
Posted by The Drs. McLaughlin at 9:41 PM No comments:

Just to stay with the music theme for a bit... The other day, I was wondering in the world of YouTube and came across these videos. It brought back the amazing local church choirs I found in Zambia. The stunning part is that these guys are amazing, but everyone else is almost as good. I listen and think, "Who wouldn't want to move to Africa?!"

Posted by The Drs. McLaughlin at 9:37 PM No comments:

Let the Nations Be Glad!

I (Jess) recently started reading Let the Nations Be Glad: The Supremacy of God in Missions by John Piper. Here are a few points from the first chapter that stood out to me. Since I’m not much of a writer, I’ll rely heavily on Piper’s more eloquent words.


Isaiah 48:9-11 "For my name’s sake I defer my anger, for the sake of my praise I restrain it for you, that I may not cut you off. Behold, I have refined you, but not as silver; I have tried you in the furnace of affliction. For my own sake, for my own sake, I do it, for how should my name be profaned? My glory I will not give to another.”

Revelations 15:3-4 "Great and amazing are your deeds, O Lord God the Almighty! Just and true are your ways, O King of the nations! Who will not fear, O Lord, and glorify your name? For you alone are holy. All nations will come and worship you, for your righteous acts have been revealed."

I would really recommend this book. I’ve only read the first chapter so far, but it’s already given me a lot to chew on!

To God be the glory forever and ever. Amen.
Posted by John and Jessica Cropsey at 7:37 PM No comments:

Last Sunday the McLaughlins and the Faders made their church speaking debut. We were grateful for the opportunity to speak in Sunday school at our church about medical missions. We seized the opportunity to answer some of the common questions and concerns surrounding medical mission work in . Unfortunately the Cropseys could not be there, but their absence allowed us to tell stories about them freely.

Our church provided the perfect audience for our first official church presentation together. This is because, well, public speaking makes some of us (namely the Faders) pretty nervous. And at church, theoretically, the audience should be a relatively nice and forgiving group. We Faders were also comforted to see that Eric’s hands were occasionally shaking a bit, too.

Easing our nerves wasn’t the only reason that our church was the ideal presentation atmosphere. In addition, our church community is full of wonderful and interested people who will possibly come along side of our mission endeavors. We were encouraged just to think of the possibilities of future partnerships with those in attendance.