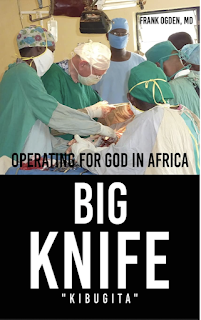 Recently, Eric and I received a special book in the mail entitled Big Knife (Kibugita).  It's special because it's the autobiography of a man who has been very influential over many years at Kibuye, Dr. Frank Ogden.  Our team has now been settled at Kibuye for eight years, which can seem like a long time but is really not much more than the blink of an eye in the grand scheme of things.  When we showed up, there had not been a long term medical missionary presence in a number of years.  To be clear, the hospital has run and cared for thousands of patients over the years with excellent Burundian staff and physicians, but without another western physician there, we didn't always have a good background as to how the hospital started, who started it, and the stories of comings and goings over the years.  Whose house was that?  How did this project get started?

Of course, since our arrival, we've had the privilege of meeting and visiting with Frank and his wife Carol many times.  Other visitors have come as well to fill in some pieces and regale us with special stories about who used to live in this or that house, when that tree got planted, the tales behind several gravestones.  It struck me as I read through the biography that I don't think we've ever shared the story of Dr. Ogden on our blog.  In fact, even though it was many years before we met him in person, Eric and I might never have gone to visit Burundi in 2010 had it not been for him.  He recruited one of our friends to visit Kibuye in the mid-2000s, while our friend was still in his medical training, and when we put out a broad request for ideas for our future team, our friend contacted us and said, "Hey, have you ever heard of Kibuye?"  So, for that and many other reasons, we'll always be thankful to Dr. Ogden!

It was enjoyable for me to read through the pages of his book because I could visualize almost all of his stories, from crazy surgical cases (including a ruptured uterus that happened 9 months prior to surgery) to crazy road trips (my favorite was the time he and his family drove 1000 miles from Burundi to Nairobi to pick up his brother, only to arrive and discover that his brother had actually flown in to Bujumbura and they had to drive all the way back!).  He shared details of many different difficulties (such as multiple home robberies and the death of his first wife after colon cancer), and joys (surgical successes, preaching opportunities, and even an entire appendix on plane and helicopter flights).  Dr. Ogden served on and off as a surgeon at Kibuye for over a 40 year time period, starting in the early 1970s.  He earned the nickname of Kibugita (Big Knife) because of his surgical abilities and capacity to perform so many operations in a short period of time!  Due to civil war and health difficulties, his time was divided between Kibuye, Kibogora (in Rwanda), and Nundu (DRC) hospitals, and also included some time practicing back in the Pacific Northwest.  His book featured the stories of many of our friends and current hospital employees who have been faithful to the church and hospital over the years, and I appreciated hearing their histories and contributions as well.

So in many ways, it was great to read a book that shared so many stories and anecdotes from the early years of Kibuye Hospital.  It all serves to remind us that our team is not starting a new work on our own.  We are continuing a work that was begun many years ago and has been carried on the shoulders of many, many people (Burundians and westerners alike).  We didn't begin the work at Kibuye and we probably won't end it, but we are just another chapter in a long story of how God has used a small rural hospital in a small African nation to care for the medical needs of so many.