If you are not sure where or what Burundi is, even in general terms like "in Africa" or "a country", don't be ashamed, for you are in the great majority.  However, we are convinced that its lack of recognition must only be from its size, because it certainly couldn't be from any lack of cultural interest or drama in their history.

If you want a reliable source on Burundi that is never, ever, ever wrong, you can click here to read the Burundi page on Wikipedia.  What follows is our own understanding and compilation:

The small nation of Burundi sits in the heart of sub-sarahan Africa, sharing borders with DR Congo, Rwanda, and Tanzania.  It had been German as a colony until being "given" to the Belgians at the end of the first World War.  It remained part of Belgium until independence in 1962, and retains French as its official language as part of this heritage.

Burundi has the same primary ethnic groups as Rwanda, the Hutus and Tutsis, and compared to the Rwandan genocide, Burundi's civil war of the 1990s and 2000s was less acute, more chronic, and certainly resulted in a country much more destroyed.

Burundi is a place of lovely people and lovely land.  It is also, from a humanitarian standpoint, the most under-developed place you've never heard of, sharing the bottom rung in almost any statistic with the "famously bad" places of the world, i.e. Somalia, Sudan, Chad, Afghanistan, Zimbabwe, etc.  Here's a chart with a few stats (circa 2011): 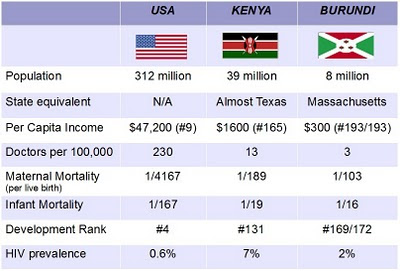 Peace came in 2005, and Hope Africa University set its base in Bujumbura shortly thereafter, growing to become a premier educational institution for the country.  We believe that Burundi is a place that has tremendous potential in the coming years, and are awfully excited at the chance to be involved.

For general reading on Burundi, we recommend Strength in What Remains by Tracy Kidder.  Here's Rachel's review on it.

Great and wonderful stuff you have shared with us in this post. Likely to other post you are doing great job. Keep it up and always share informative stuff like this.DoubleDown Casino game Apk