America truly is the land of plenty.  There are so many basic resources that we just take for granted because they’re always there — food, water, electricity, fuel, etc.  In Burundi, we encounter shortages in these areas on a pretty regular basis, and that’s even when we have the financial resources to buy them, a luxury many Burundians do not have.

In recent weeks, there has been another fuel crisis in the country and we’ve had to restrict travel to essential trips only, coordinate trips with each other more than we already do, and use the most fuel-efficient vehicles for those trips.  While there is certainly inconvenience that comes with these choices, it’s so much easier to be grateful for the resources that we DO have when we see how much others DON’T have.

The Fader brothers (Jason and Caleb) are masters in the art of using resources wisely.  During a team business meeting, we were discussing the new solar power system at the hospital and how we can make lifestyle adjustments to maximize battery life and deal with power shortages when it’s rainy or nighttime.  As an off-hand comment, Caleb said, “You know, defrost your cheese wheel in the fridge instead of the counter so that the fridge doesn’t have to work as hard to stay cool.”  Two things struck me about this comment.  One, he said this like it was obvious, but I have to admit that I never would have thought of that as an energy-saving move.  Two, I found it interesting that he used cheese instead of meat as his example, but more on that later.  Unfortunately, many of us on the team don’t naturally think like conservationists simply because we’ve never HAD to (until we moved to Africa)!

The Faders are slowly transforming me into a conservationist, but I still have a long way to go.  Here are some nuggets of conservationist wisdom that I’ve gained from them over the last 10 years.
While thinking about this blog, I thought that surely there must be so many more habits that are so natural to the Faders that they don’t even notice them.  After pressing for more info, this is what I I discovered:
Really, there are so many gems here that I could go on and on, but I think you get the picture.  The Dutch-missionary combo is a pretty good way to ensure maximum thriftiness.

Thankful for these teammates who have pushed me to think about how my lifestyle choices impact our world.  If you want to see how many planets we’d need if everyone lived like you, check out https://www.footprintnetwork.org.
Posted by John and Jessica Cropsey at 6:37 AM 2 comments:

Email ThisBlogThis!Share to TwitterShare to FacebookShare to Pinterest
Labels: conservation

The Talking McLaughlins, Here and There

During our time in the US, we did a good bit of speaking here and there, on various subjects.  Some of those sessions have been posted online (and some will be posted, but not yet).  Here are some links, if you are interested in listening more:

1.  Knox Presbyterian Church:  "The Already But Not Yet Kingdom".  Though I've preached at a lot of African churches, this is the only time to date that I've preached at a US church.  The text is John the Baptist and his doubts while in prison; the theme is our struggle to find hope in first fruits rather than finished work.

2.  StoryPrint.  My friend Wes Burtner runs a podcast about life stories of people in/from the Nashville area.  He interviewed me and the podcast is available here (Episode 003).  This 90-minute interview spans a lot of topics, including vocation.

3.  Louisville GMHC:  Rachel and I moderated the Marriage & Missions panel, including the Kims, the Chupps, and the Vaughans.  Our friends had some great perspectives to share.  There are pauses for small group discussion periods, but it should be easy enough to skip over those parts.

4.  Louisville GMHC:  I did a different breakout session entitled Walking With Those in Need Without Losing Heart.  The material for this talk was culled from four chapters of my upcoming book (more on that later!).
Posted by The Drs. McLaughlin at 8:02 AM No comments:

Email ThisBlogThis!Share to TwitterShare to FacebookShare to Pinterest
Labels: sharing

A long time ago, before any of us moved to Burundi, we packed a container of "essential things" for life here.  Because we were unsure of what sorts of things would be available here, it was deemed a good idea to order appliances in the US that were wired for 220 volt electricity, so that we could have high quality appliances that would last for a long time, but that would also work well in our new environment.  Stoves, fridges, washing machines, and microwaves were loaded up in the container that arrived here December of 2013, several months before our houses were completed.

Building a house was an adventure that was...occasionally...somewhat fun.  But mostly overwhelming and confusing.  Our house was the first to be built.  From almost day one, there were unanticipated issues.  Eric and I will never forget standing on a slope looking down at our newly poured foundations, then looking at the "blueprints," and then looking back at the foundations, wondering if there were perhaps new plans for our house that we didn't know about.  In fact, there were not, but every room except two had been mis-measured (by up to 2 meters).  We rolled with it.  We would occasionally get asked what kind of trusses we wanted (I didn't know what a truss was) or where we wanted our windows, and then Eric would rush off to figured out where to put windows and the workers would remove rows of already laid bricks in order to accommodate said requests.  So, yes.  An adventure to be sure, and we are so grateful that for the past 4 years, our teammate Caleb has helped the process run a little smoother every time. 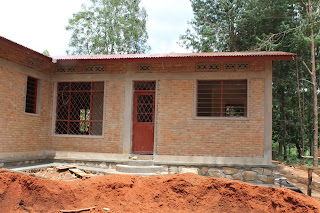 So, the day came in 2014 to move in our appliances in preparation for our move in, how exciting!  Sadly, there was an issue.  We had already been asked as to the width of our doorframes (um, standard size please?) and when the refrigerator was brought to the kitchen door, the fridge was about 10cm too wide.  Apparently Burundi standard size doors are not large enough to accommodate American "standard size" appliances.  Even after removing the kitchen door from the frame and the fridge door.  Finally, the security bars on the kitchen window were sawed off, the fridge was hauled in, and the bars were re-welded on.  We vowed to never remove the fridge again.

I won't go into all the details, but the fridge has had a lot of issues.  It was repaired (while remaining in the kitchen) at least twice, and then we got an email on Christmas Day saying it seemed to have died for good.  Bummer.  Surprisingly, there is a Canadian Muslim refrigerator repair man now living in Bujumbura, who came up recently to try and repair the fridge.  Although he was not successful, he thinks that he will be able to fix it in his workshop in Bujumbura.

We tossed around the idea of sawing the bars off the window again, but this time, Caleb came up with a new idea: why not widen the doorframe permanently?  I must admit, I was a bit skeptical.  The walls are solid brick and concrete.  I envisioned sledgehammers and half of my kitchen wall crumbling down.  But Caleb was very confident in our new plan.  So, on Wednesday, three very competent Burundian workers showed up at my front doorstep.  They promptly got to work with their little chisels and hammers (no sledgehammers, though) and removed 15 cm of wall.  Wouldn't you know it, the fridge fit out perfectly!  By the end of the day, a new frame was fitted, the concrete was poured, and other than the lack of paint, you could hardly tell work had been done at all. 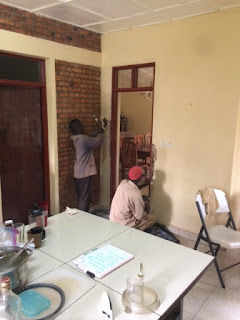 Now our fridge is on its way down to Bujumbura, hopefully to be repaired, and when it returns, I look forward to sliding it right in the kitchen door, with no chisels, saws, or hammer required.
As I was typing this up, Eric reminded me that actually we have had similar problems in America, so as "exotic" as this problem seems, we did have to move a queen box spring into our bedroom in Ypsilanti MI through the window...because it wouldn't fit up the stairs.  All's well that ends well....