As some of you may already know, four of the McCropder adults (Jason, John, Eric, and Rachel) got a chance to head down to the annual Global Missions Health Conference in Louisville, KY last weekend. This event is a significant one for many reasons. One (the nearest and dearest to my heart) is that this conference, in 2003, is where Eric and I first met. We celebrated our five year anniversary of knowing each other this time around. :) Two, only slightly less significant, is that the McCropders were officially formed at the Louisville conference last year, 2007. All three couples were able to meet together and after fellowship and prayer, decided to throw in our lots together, trusting that God was leading us in that direction.

This year, we officially made known our decision to head to Tenwek Hospital next fall as a first step in what will hopefully turn out to be many years of fruitful ministry together. Part of what makes the GMHC great is a chance to network with tons of people and organizations, as well as see old friends and classmates and people we have served with on short term trips. On Friday at lunch the four of us enjoyed spending an hour or so with docs and spouses who have or are serving at Tenwek. This was a great source of encouragement, and I also got some good questions answered (the answer is no, we don't have to bring our own refrigerator to Kenya...)!

For those of you who who have never been to the conference, but have an interest in health, public health, community development, short term missions, long term missions, etc etc, it comes highly recommended. Some highlights from this year's conference, at least for me, seemed to center around the cost of serving God. For starters, there was an amazing plenary lecture by Rear Admiral Tim Ziemer, head of the President's Task Force on Malaria. I didn't even know this existed, but apparently President Bush dedicated over two billion dollars towards malaria treatment and prevention in Africa. More powerful, though, was Adm Ziemer's personal story about growing up as the kid of missionary parents serving in Vietnam just before the Vietnam War. His father was martyred there by the North Vietnam Army. Another breakout session by Jeff McKinney (surgeon in Honduras) talked about "Counting the Cost," centering around the fact that sacrifice is supposed to cost us. And Rick Donlan, a doc serving in the inner city of Memphis, spoke on the David/Goliath battle in the context of risk and serving God. So many great themes that hopefully we'll be exploring in more depth over the weeks to come in our blog posts.

In the meantime, we're looking forward to a McCropder "summit" this weekend as the Cropseys will be in town--the first time we've all been together since June. Stay tuned for more adventures and musings on our future together.
Posted by The Drs. McLaughlin at 9:37 AM No comments:

Where in Kenya is Tenwek?

Finding a map of Tenwek's location has proved surprisingly hard, so I thought I would provide one (with help from MapQuest), in a "zooming in" series for orientation. Tenwek is the red star. You can click on each image to enlarge it for detail. The big body of water nearby is Lake Victoria. The primary tribal group is Kipsigis, but they provide care for a number of other tribal groups, including the more nomadic Masai. 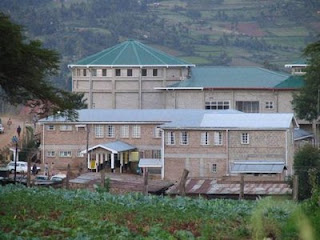 For approximately 1,001 years, we have been asked by friends, families, and casual acquaintences, "What are you doing when you're done?" Our response: "We're moving to Africa to practice medicine." Of course, this is followed by the question, "Oh really! Where in Africa?" Umm, we don't quite know.
The interesting thing is that we have been asking lots of questions and even finding some answers regarding future plans, but the specific geographic location has remained undecided. Nevertheless (and we interact with other people in the same way), this is the question that people ask first, likely because of the natural desire to grasp something concrete about our aspirations. Well, the time has come.
We will be moving to Tenwek Hospital in southwest Kenya, for two years, sponsored by World Medical Mission, for a time of training, service, and vision building. Tenwek is just off the equator, but at an altitude of over 7000 feet, resulting in a very temperate climate. We are very excited about this, particularly because there are great opportunities for us in all of our particular medical specialties, as well as chances to work with the Kenyan surgical and family practice residency programs. Most of us just got back from the Global Missions Health Conference in Louisville, KY, and had a chance to meet face-to-face with some of the people we will be working alongside. This was tremendous, and just further added to our excitement.
After all these years, to watch our future plans gain clarity as they emerge out of the fog. This is wonderful, and we are thankful for the fruition.
Posted by The Drs. McLaughlin at 9:59 AM 7 comments: