Things That Go Bump In The Night: A Guava Tale 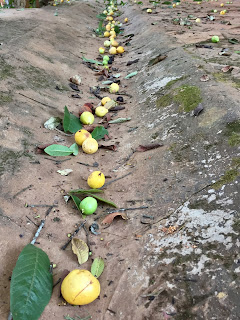 Sometime around the end of May, the rains suddenly stopped and dry season began. Shortly thereafter the first guavas began appearing on the trees outside our apartment. For the Banks family, this is our first dry season and our first guava season. At first, this novel new fruit was welcomed by all. As more became ripe, the crowds and enjoyment grew. I’m not sure how to describe the taste exactly, there is a sweetness and a tartness. My boys describe the taste like a mix between a strawberry and a peach. I’m open to other suggestions. I was just excited to have such a delicious fruit growing right outside my backdoor.

That is, until they started falling off the trees. And landing on my tin roof. In the middle of the night.

The guavas were becoming so ripe and so numerous that they would get too heavy for the branch and would fall off the tree. The problem is, many of the branches extend out over our roof. When the guavas fall and hit the thin layer of metal, it can sound like a gunshot going off. As more and more ripen, these loud noises are becoming more and more frequent. During the day, they are only mildly annoying and easy enough to ignore. But at night, as darkness and quietness descend on the compound, the guava rears its ugly head and goes, “BANG!!”

This fruit is starting to make me think of that guy at a party that doesn’t notice a hush has fallen and keeps talking in a too-loud voice. Only a guava can't feel embarrassment, he just continues making outburst after outburst.

At night, it takes me about 45 minutes or so to get the boys settled down for bed, read them a story, sing a song and pray. Then as I slowly leave their room and shut the door, it’s hard not to spend a few minutes cringing waiting for the next guava to bounce off the roof. And it usually doesn’t disappoint.

So recently I decided to take matters into my own hands. One afternoon, I found a very long bamboo stick and started whacking the guava tree outside my backdoor. I have to admit it felt pretty good. I enjoyed hearing those dozens and dozens of BANGs that were happening at 3:00 in the afternoon instead of 3:00 in the morning. I whacked and whacked until no more would fall. I must have knocked down a few hundred. There were still some guavas left, they just weren’t ripe enough to be knocked out of the tree. The boys helped me collect them and it made a nice gift to all the guards and night watchmen of the compound. 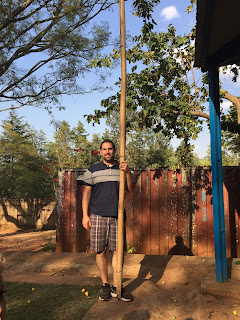 This situation has reminded me of the different seasons of life. Some are joyful, some are sad. Some we can’t wait to begin, and some we can’t wait to finish. But God has a plan to teach us something during each season. Even in the season of mild-guava-frustration, God is there, reminding us that there is still sweet fruit waiting for us. Fruit that He has provided. So as guava season is beginning to come to a close, I am encouraged to appreciate this season for what it is. And to enjoy the sweetness and the tartness that life has to offer. 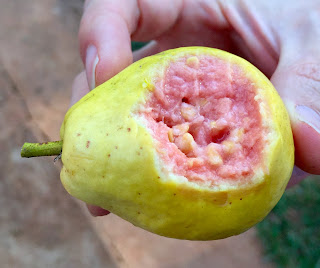 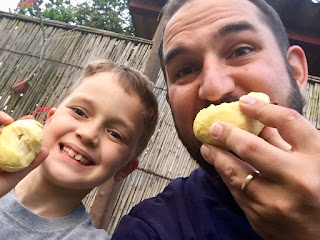 There are few things more rewarding in life than watching someone you love, do something they love. It was such an honor to watch my husband work on this new two-story surgical ward from the very start (18 months ago) to it's completion (last week!). Although building hospitals in rural Africa has been one of Caleb's life-long dreams, the job is not without it's fair share of difficulties. Caleb has repeatedly mentioned how grateful he is that God provided the best mentor for this first major project through a wise, humble engineer with EMI, Tony Sykes. Together, with about 250 Burundian masons and builders, these men built one of the most beautiful hospital wards in all of East Africa. And on July 14, 2017, the President of Burundi came to open it up.

Please enjoy these pictures of the journey.


We often don’t celebrate American holidays on the days that the rest of Americans celebrate.  For one thing, obviously, they aren’t Burundian holidays and thus if the holiday falls on a weekday (as Thanksgiving always does) it’s a normal work day for us.  But I do want to celebrate, for several reasons.  One, I’ve grown up celebrating certain holidays in certain ways and feel quite nostalgique at certain times of the year.  Two, even though my kids have spent most of their lives outside the US, they will return some day and I’d like them to have a good understanding of certain holidays.  So this year, July 4th came and went.  My Facebook feed was filled with pictures of fireworks, sparklers, and berry topped desserts…and it all felt rather anticlimactic here, where a teammate graciously played patriotic songs for my kids while they colored flag pictures, and I worked a normal day. 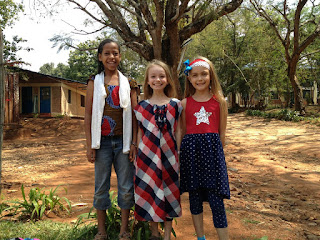 Fortunately, the team rallied and we decided to celebrate on July 8th instead. It wasn’t July 4th, and Burundian independence day had come and gone (mostly unnoticed by us) on the 1st….plus, the team is no longer solely Americans.  In honor of our Canadian teammates and our British short term visitors, we decided to name the day “National Pride” celebration day.  Since Canada and Britain aren’t independent in quite the same way. :)  In typical Kibuye fashion, the holiday needed to be modified somewhat to fit our resources, but we still tried to make it as “classic” as possible.  Scott and Lindsay picked up a couple of small Burundian “Jikos,” clay and metal pots filled with charcoal that are used instead of stoves, and created them into a small grill.  Potato salad, deviled eggs, and french fries appeared on the tables, along with a three layer red white and blue cake.  (And, to be honest, Indian style rice, papaya, and other local foods in lieu of chips and jello).  There had been an embassy 4th of July party (in June) and so a few people showed up with “Uncle Sam” style hats.  We ate on picnic blankets under the trees and a few rounds of horseshoes and baseball followed the food. 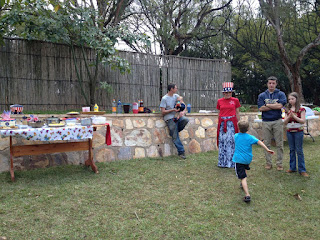 A good time was had by all.  It got me thinking about my heritage as an American, and how interesting it is to step out of my home culture and see it through new eyes.  It’s now over seven years since we left the US to work in Africa.  I identify less and less as a typical American, but not necessarily more as a Burundian.  I'm really grateful in a lot of ways for the culture in which I grew up.  There are things that I used to take for granted, that I now know are privileges instead of rights.  The freedoms I experienced (and still do) as an America are far from standard in the world.  And I think that working for similar freedoms for people of other countries--freedom to worship, free to pursue health and an education, free to live without fear of starvation--is a GOOD and even necessary thing.  Perhaps without my American "past" I wouldn't see things in the same light.

Of course, living outside America has been a good thing for me too, and almost every day I count it a blessing to have had my world view expanded (and to have it continually expanded!).  To be able to see the joys and sufferings of people from a world far different from my own, to see how we are different and yet still in many ways the same.  To experience the challenges of communicating in other languages, to know how it feels to go without, to feel the shock of foreignness but eventually to accept the foreignness as the new normal.  So, happy independence day, America!  Thanks for the role you play in my life.  And happy independence day to Burundi!  Thanks for being my new home. May we continue to work together to make it a better place. 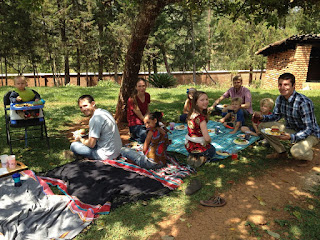 COTW: The Continuing Story of the Kibuye Triplets and the New Peds Building


I’d like to introduce you to one family who will benefit from the new peds building (click link to see a 3 minute video). Some of the long time blog readers might remember the story of the triplets who Eric wrote about 2 years ago.
Well, the two remaining triplets are now 2 1/2 years old and they’ve been hospitalized three times on the malnutrition service - spending months of their lives at our hospital. 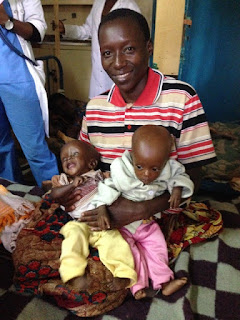 Their mama understands what nutrition they need and does her best to care for them at home, but repeatedly she watches them become thinner and sicker, and finally she decides to take the arduous four hour walk to our hospital carrying both kids. I recently read a study highlighting the high (20%) mortality rate of twins in sub-Saharan Africa - three times that of non-twins - and that includes countries with much better infrastructure than Burundi. So it’s easy to imagine that the mortality rate of twins or triplets in Burundi is much higher. We always have several sets of twins in the hospital - usually premies in the NICU and kids on the malnutrition service. It’s so hard for mothers who are also malnourished to have enough milk for two babies at once.
So for Emery and Rita it’s two steps forward and one step back - especially this month. They were doing great and ready to go home (though still only weighing 10lbs and 13lbs) but I wanted them to stay in the hospital a little longer so they could learn to walk with Judith and Anna through some intensive physical therapy.
I regret that decision now as they both caught serious infections in the hospital partly as a result of our overcrowding and they almost died. Praise the Lord who healed them one more time! They’re thankfully heading home once again now, and the mother will continue the physical therapy at home. But I look forward to the day when we will have a new pediatric ward with enough beds for each patient and a dedicated play room to help with the development and sensory stimulation for these kids. And I hope that when patients are no longer sharing beds, that the risk of them also sharing infections will decrease dramatically. Please pray with me for Emery and Rita and the many other patients we take care of with severe malnutrition and pray for God to provide the funds for a new well-lit, clean space in which to care for them.