“What about driving down the road at sixty-five miles per hour, only a few feet away from cars going the opposite direction at the same speed? Someone would only have to jerk his or her arm and you would be dead. I don’t think that’s morbid; I think it’s reality”
- Francis Chan, Crazy Love

To say I don’t like driving, or rather being a passenger, in cars in Burundi is an understatement. It terrifies me. During my first African driving experience, many years ago, I was listening to the book Crazy Love by Francis Chan. I distinctly remember listening to the part of the book quoted above and thinking, “The fact that I could die at any moment is at the forefront of my mind, this driving is insane and if we make it to our destination it will be a miracle."

The majority of the roads in Burundi (aprox. 92%) are not paved. They are red dirt roads, rocky and rutted and slippery when wet. They are not heavily traveled by vehicles, which makes me feel safer, but driving on them leaves me feeling nauseous and tense as we bump and bounce and I try to brace myself from hitting my head on the ceiling. 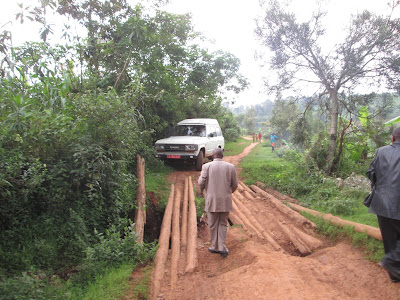 Thankfully the main road from Kibuye to the capitol Bujumbura is paved. This is the road we as a team travel most often. It is a curvy mountainous road with areas of steep drop offs and many people, even small children, walking along the sides of the road. There are bicyclists, with their bikes overloaded, whizzing down the hills, and young men on bikes holding on to the back of vehicles to be pulled up the hills. There are boys and men who climb onto the back bumpers of semi trucks and hang on, catching a ride, as we drive behind them praying that none of them fall off and slip under our car. 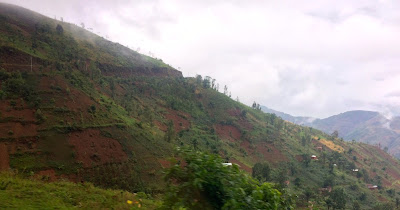 It’s a two lane highway with no lines dividing the lanes or restricting cars from passing one another around blind curves. This means that often you will see a vehicle coming directly at you as it tries to pass another vehicle. Potholes are another part of life on the road here. There are many, they are large, and people drive around them in the wrong lane. 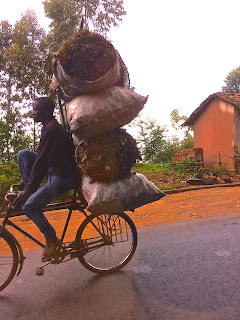 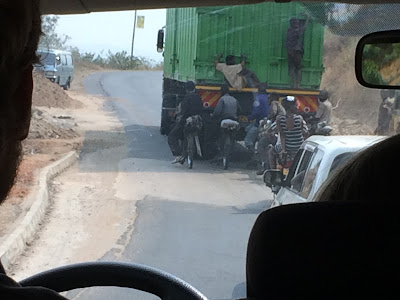 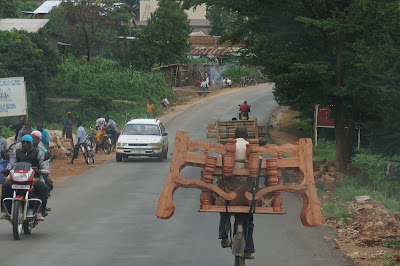 All these unsafe driving conditions have always driven me to prayer. However, my prayers while driving have changed over the years. They have gone from a place of anxiety to a place of utter surrender. I so obviously have no control over what happens in that car, over life or death or what any other driver will do. But, reality is, I never am the one who has control, even when I am sitting in my living room. God holds our lives in his hands and every breath that we take is allowed by His will. It’s just that driving brings this awareness to the forefront of my mind and I have to remind myself of these truths. I continue to pray as we drive around every curve, that God will continue to sustain our lives, and I get to praise Him when we’re still breathing on the other side.

Last month our family decided to go to Bujumbura for the medical school graduation and a little R&R. We left Kibuye as soon as the sun was up and it was still morning when we began our decent towards the capital. The road was wet from recent rain and as we rounded a sloped curve of the road our car began to swerve. I heard my husband say, “I don’t have control” as he tried his best to straighten us, but we slid into oncoming traffic. Our car slammed into the side of a smaller car and scraped along it's side until we came to a stop, in the wrong lane, facing a blind curve. We quickly shuffled our kids out of the car and across the street, afraid that another car would come around the curve and strike ours. By God’s provision three of our national partners were driving in a car behind us, they pulled over and came to our aid, helping Greg communicate with the other driver, who only spoke Kirundi. They stuck with Greg throughout the entire, complicated, multi hour process of negotiations and paperwork. Other teammates in another vehicle were also heading to the capital for graduation and soon arrived to help.

Our youngest was a bit shaken, as expected, but as we helped him retell the story of what happened we couldn’t help but highlight the wonder of the situation. Never before have we had teammates and national partners traveling behind us and available to help. We lost control before coming to the steep drop offs. The car in the other lane was a small one, not a tractor trailer or a bicycle, and it was not a head on collision. No one was injured. No one was walking along that side of the road to be struck. And there was an area across the road where it was safe for us to stand and for other vehicles to pull over. We do not know why we were in an accident, but, for being in an accident the situation could not have been better, and we see God’s provision over the situation, and on the peace that we all felt as we climbed back into cars and finished our trek to the capital. 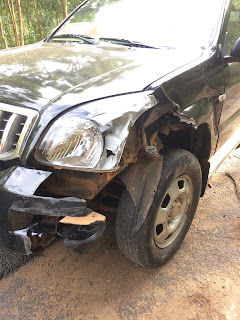 The car, which has been named the Black Mamba, is now all fixed up and sporting 4 new tires with good tread.

On Teaching And Huey Lewis

A few years ago I saw Huey Lewis in concert (yes, he still rocks).  He had some new material, but as you can imagine, Huey Lewis can’t really have a concert without playing “The Power of Love”.  He introduced this song with something to the effect of “when I wrote this song in 1985 I never imagined I would have to sing it every single day for the rest of my life”.  I got the impression he wasn’t as excited about singing this song as we were about hearing him sing it.

Back to Huey in a bit.

I did not come to Burundi to DO anesthesia, but rather to teach.  We are surrounded by an ocean of students, nursing, anesthesia and medical students.  Some students are assigned to my service for a day, some for a week, others for a month.  And so, I have an opportunity each and everyday to teach.  And given the limited duration I will have with each student, I have spent a significant amount of time reflecting on what is most important and how can I convey that information in a meaningful way.  Given that most of these students will work in settings with limited resources, how does one teach resuscitation and critical care to students who will work in hospitals without ventilators or defibrillators, and sometimes without oxygen.

As a result, I have been trying to decide what are the 8 or 10 lessons I can teach that will impact the care these students can deliver, lessons that might one day save the lives of their patients.  And how can I present these topics in a way that will be cemented in their memories when presented with these problems in the future.  I have developed a series of “mini lessons” that I try to give every student who works with me.  And, as a result, I find myself giving the same “mini lessons” week after week, sometimes day after day.  And as I was teaching yesterday once again about the systematic approach to hypotension, the words of Huey Lewis returned to me ….. “when I signed up for this, I never thought I would be teaching the same lesson every day for the rest of my life”.

It can be draining for sure.  And there are students who leave me frustrated and discouraged, and there are others who invigorate me and leave me filled with hope for the future of health care in Africa.  But deep down I feel confident that this is exactly what the Lord has called me to right now, and that there is no better way I could invest my time than in repeating these lessons day after day.  How does one find the strength to persevere in the face of monotony and sometimes discouragement?  Perhaps the answer is found in the words of Huey Lewis himself.  Maybe, just maybe it is found ..... in the power of love. 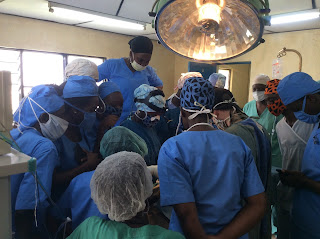 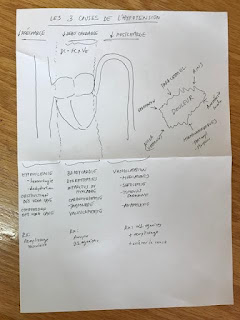