Translational research is the phrase we use (or formerly used, I’ve been out of that world for a while now) to describe how something discovered in a Petri dish could be made relevant for patients. It is about getting from theory to practice. Now before your eyes glaze over and you scroll on to the next post in your feed, let me assure you that no boring science or statistics will appear in this article. Rather, I want to tell you what happened to me the other night with three Burundian pastors and elders in our house.

Since the beginning of the year, I have been working through a curriculum called Fundamentals of the Faith with a group of hand-picked men from the community here. They are two chaplains, an administrator, a nurse anesthetist, and a schoolteacher. All are leaders in their respective churches. This curriculum has been translated into a bunch of different languages (at least nine) but not into Kirundi. So our plan has three phases:

We are well into Phase 2 and every Monday night we drink tea, eat some snacks, and talk about how to convey timeless biblical truth in their native tongue. I’m largely superfluous to the technical work that these five guys are doing, but occasionally my amateur language-learner status comes in handy. This was one of those rare helping moments.

We need some background to start. The word for “spirit” in Greek (pneuma) is neither masculine nor feminine. However, every time a pronoun is used in reference to the Holy Spirit, the masculine personal pronoun shows up. This is a little linguistic nuance not lost on Bible translators and theologians across the ages - a place where grammatical rules were broken in service of a truer expression.

English carries this through pretty well. For example, in John 14:17, clearly talking about the Holy Spirit, Jesus says, “You know him, for he dwells with you…” Not “it,” “him” and “he.” French likewise respects this understanding, using “le” and “il” for the pronouns. But Kirundi doesn’t have gendered nouns or pronouns like students of European languages are used to thinking. There are sixteen noun classes in Kirundi, so it’s complicated, but there is no “masculine” pronoun to be used. How to translate the exercise that asks students to read the passage and identify the pronouns?

Well, the Kirundi word for spirit, mpwemu, is in a particular class (Class 9, for those of you counting at home). This class includes, as far as I can gather, mostly farm animals. (Scroll down for a list of Class 9 nouns.) But interestingly enough, the pronouns from that verse are from Class 1 and are actually found as infixes within the conjugated verbs. (Yep, you knew about prefixes and suffixes already, but Kirundi also has infixes - in the middle of the word.) Class 1 is exclusively used for people nouns, though some people nouns fall outside of Class 1. So even though Kirundi grammar would call for one pronoun, the translators wisely chose the one that makes it clear that the Holy Spirit is personal rather than animal. Way to go!

But I titled this post “Translational Research” because a wonderful metamorphosis is happening as these brothers work the principles from French into Kirundi: their eyes brighten and their hearts come alive. It is fun for me to watch as this task takes what might otherwise remain cold and intellectual and pushes it to the warm, beating center of their understanding.


The topic for Kibuye Hope’s Academy’s (KHA) first learning experience day was archaeology. It was a great topic because we knew so little about it, but were interested and wanted to learn more.

Archaeologists must be curious. They often do not have much information about the objects they find. Sometimes they find artifacts (things that you can pick up and move) and sometimes they find features (large structures or things that cannot be moved). Technology helps them to ask good questions and to know where to look. They use satellite pictures of the earth to locate unusual dips or rises on the surface.

Our first activity was what the archaeologists would normally do with the artifacts at the end of their long search. We went down to our local trash pit and talked about how in hundreds of years, archaeologists might find our junk. Archaeologists often look at garbage from the past to learn about the people who lived at that time. We then divided into groups.  Each group was given a piece of modern day rubbish (a plastic soda bottle, an empty matchbox, Styrofoam packing panels) and we pretended to be archaeologists. Even though we knew what our objects were, we pretended they were mysterious and asked questions that archaeologists ask when they find an artifact. We asked ourselves, “who, what, where, why, and how.” One group was given a Styrofoam tray and after many observations we decided it could have been used as a make-your-own hat. You could stick feathers or flowers in it and it would sit nicely on a bun.

Between our first and second activity we had recess. It was fun to play and eat the homemade archaeology-themed cookies provided by Aunt Julie B.

Next, we got to become archaeologists ourselves. There were mock dig sites where we could excavate ancient (or two day old) pottery and puzzle pieces. The digging process showed us how patient and precise archaeologists must be. It also called for a lot of teamwork.

When we got back to the classroom we wrote letters to our future selves. We placed these letters and a few extra items in a time capsule. At the end of the school year we will get out our time capsules and read the letters that we wrote.

After lunch, we planted a garden with Uncle Carlan. He did a wonderful job of having us work together to make something beautiful. God was the first and very best gardener. We enjoyed thinking about gardening like that as we divided into classes to some gardening ourselves. Middle school sectioned the garden into plots, 4thgrade got manure and seeds, and 1stand 2ndgrade picked out where we were going to plant everything. Everyone got there and planted the seeds, watered the garden, and had fun. It looked amazing when we finished.

All of the kids walked out of school a little smarter. We got to learn so much about archaeology, but we also got to explore outside our classrooms, and spend time together as the whole school. Archaeology day was a blast!
Posted by Scott and Lindsay at 1:50 PM 1 comment:

Two weeks ago, Kibuye's first ever chime choir had their debut performance! While at my parents house in California last year, I saw the chime set that we had used in their church years ago. It struck me that this would be a great way of teaching music notation, counting, and ensemble skills while at the same time blessing the community. Our chime choir is made up of both team kids and Burundian youth from the church. Check out the videos at the end. Enjoy! 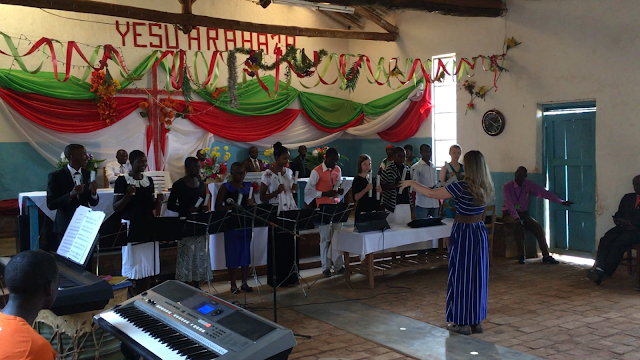 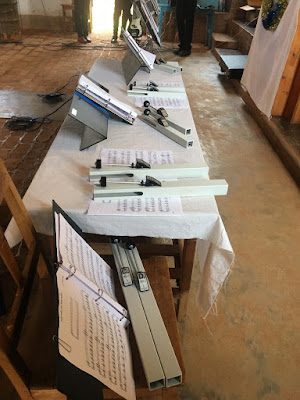 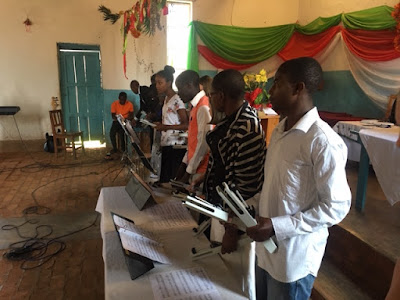 Posted by Michelle Wendler at 4:09 AM No comments:

We have an increasing number of visitors coming through Kibuye these days, bringing with them needed expertise and often goodies from the USA to share.  We certainly appreciate the skills that they offer, but sometimes it’s the ones that you don’t expect that are the most delightful.

Recently, a team working with Sister Connection (an outreach to Burundian widows) stopped by Kibuye for the day to see what’s happening.  Before they even arrived, a woman in the group offered her services as a professional hairstylist.  Of course, many of the ladies on the team jumped at this opportunity and slots quickly filled up.  Everyone arrived with clean, wet hair and she cranked out 17 haircuts in 5 hours, working through her lunch break and braving the first haircut for a 1-1/2 year old. 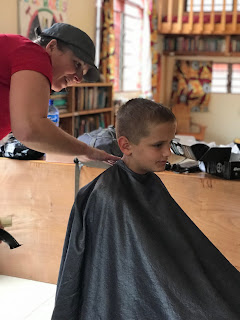 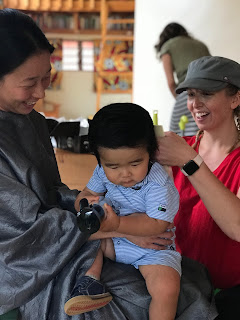 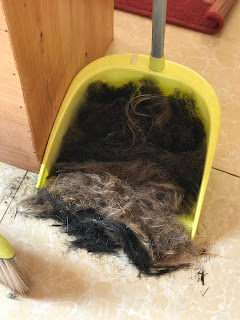 That's a lot of hair! 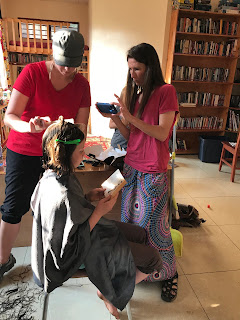 Heather getting a lesson on how to cut Anna's hair

At the end of the day, she gifted us with her brand-new cutters, scissors, spray bottle, and drape.  As an added bonus, her husband (a plumber) went around fixing all of our leaky sinks!

A couple months ago, one of the ITEC team (who helped finish the massive solar project at the hospital) offered his expertise in 3D printing.  He adapted his college-level explanations for our 1st-8th graders, brought 3D printed models to share with them, and even acquired free licenses to a design program. 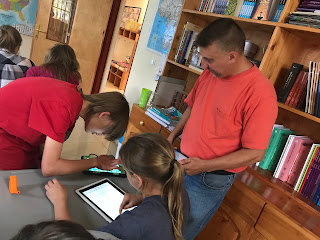 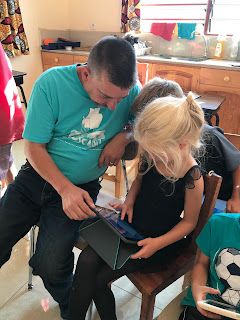 When Julie and Logan Banks visited our team in 2014, Julie led the women through a worshipful yoga experience and also taught some ballet to our little girls. 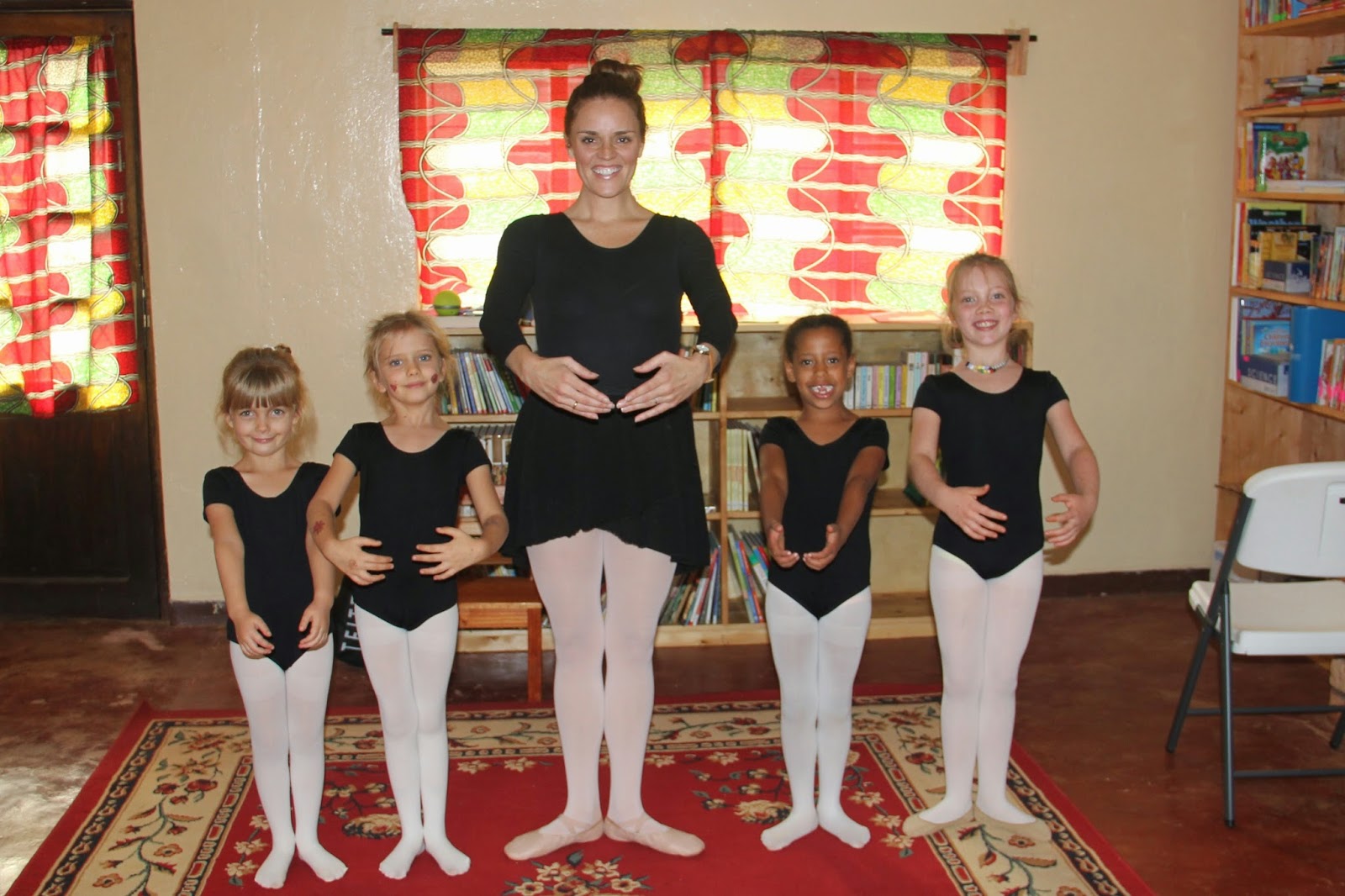 We get to benefit from her unique talents on a long-term basis now that her family has joined our team.  (Imagine game show hostess, drama and dance club director, party planner extraordinaire, pep rally leader, etc.)

I’ve learned that anyone who visits has something that they can offer to serve this community (either missionary or Burundian) and am looking forward to seeing what other talented people God brings our way in the future!
Posted by John and Jessica Cropsey at 4:21 PM 2 comments: