For those new to the site, a few selected favorite posts, to give you a flavor for what we write about and experience: 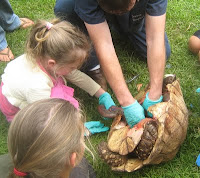 Anna’s kindergarten science studies this year have been a conglomeration of African unconventional home-school topics. Here are a few highlights:

Turtle Anatomy and Physiology: The neighbor’s pet tortoise passed away unexpectedly, so Jason and Anna performed an autopsy. I counted this as science class for the entire week...(more)

Case of the Week: Man vs. Elephant 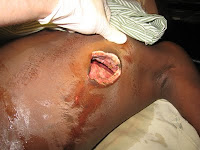 Apparently one of the occupational hazards of being a Masai herdsman is the occasional run in with an elephant. What an elephant would want with a bunch of cows I do not know. Maybe the herdsman provoked the elephant's attack somehow - I could ask him when he gets off the vent.

"We have a teenager who was gored by an elephant" was the call I received from my resident the other night. The goring had occurred at 2pm the day before, but the herdsman couldn't move well enough to get home - so it wasn't until the following day that his family came looking for him because the cows hadn't come home...(more)

Sudan on a Wing and a Prayer 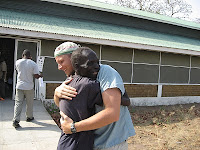 My trip to Sudan was the stuff dreams are made of.  Some of them are my own silly dreams, like operating in the middle of nowhere in blazing heat, barefoot, dressed in shorts, t-shirt, baseball cap and sterile gloves (too hot to wear a gown).
The first leg of the journey involved taking a twin engine plane to Lokichokio, northern Kenya.  Upon landing, you realize this is not a normal airport.  On the tarmac sits the Samaritan's Purse DC3 as well as a fleet of Cessnna Caravans with things like AIM AIR (African Inland Mission), MAF (Missionary Aviation Fellowship), Medecins Sans Frontieres (Doctors without Borders), and United Nations Humanitarian Relief painted on their sides...(more)

Elise and I were on a bat cave adventure a couple Saturdays ago when I took a gander down the Chepkulo River and thought, "Shoot, that looks like a fantastic ride for an inner-tube."  I grabbed Jeremiah "Sticky" Galat, and we headed into Bomet to find our rides.  We eventually found our lucky tubes at Oil Lybia, our handy local gas station.  Now, these tubes required about an hour's worth of patching before they would hold air, but they looked tough otherwise.  We bought a few back-up patches and glue just in case we might spring a leak.
On Sunday, Sticky, Jason and I got geared up for this adventure and took off after church...(more)

Standing in the Gap

It's an image burned into my mind. Young mother and father, standing on either side on a ICU bed, standing in the gap.

Their baby, 3 months old and occasionally opening her eyes, labored breathing, fitted with a BiPap mask that's made for an adult, but it's getting the job done for the time being.

Mom, standing on the left, maybe all of 30 years old, and all things considered, the years of worries are wearing pretty lightly on her. She has apparently known a lot of them. Besides the obvious poverty shown by her clothing, I'm told that she herself had been sick...(more)

When you are tired
Not just your hands
Not just your feet, but your heart
Wounded from all you can't do
Or you did, but it's fallen apart...(more)

casino online indonesia said...
This comment has been removed by a blog administrator.
November 29, 2015 at 8:58 AM