One of the interesting things about living abroad is your status as a resident alien. In fact, we all have little cards that have our beaming faces beneath the words "Alien Certificate". Also, you get the "pleasure" of visiting embassies and immigration offices, which gives you a new appreciation for immigrants living in the US.

In the past, these thoughts (especially those involving embassies) sounded a little glamorous. A little piece of American soil that I can visit right here in Kenya! I think most of this misconception comes from too many Jason Bourne movies, but I still think it would be cool to have a second passport. 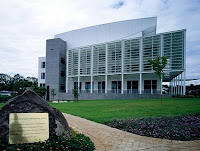 So, when John and I realized our passports were going to expire in just over 6 months (the period of time needed for travel), we trekked into Nairobi to see what this embassy was all about. Now, some of you may remember that the US Embassy in Kenya was bombed by Bin Laden et al back in the 1990's. Thus, the new embassy (pictured here) has some pretty beefy security. And no place to park. But once you get through security, it's really pretty smooth. The reality, though, is that it's more like a little piece of American bureaucracy rather than American soil, but even that can be heartwarming. I haven't yet met any Americans there. Most of the people in the "American Citizen Services" section (which is open just a couple hours in the morning) appear to have originally come from Somalia, and the chosen television programming in the little lobby is Al Jazeera, which is, at the very least, ironic.

I do give them some credit for efficiency. John and I's passports had to be flown to DC, renewed, and flown back. How long did this take (without being expedited)? 7 business days. Whoa. 2 years ago, Rachel got hers renewed stateside, and it took 12 weeks. Thus the moral: if you want your passport renewed quickly, fly to a foreign embassy for the deed.

After getting the passport (which by the way, has more than twice as many pages as my old one), I had to head to Kenyan immigration in order to get the work permit and re-entry pass from my old passport transferred to the new one. This is always a bit intimidating, but thankfully there's a very friendly Kenyan guy in Nairobi named Johanna who met up with me and saw me through the snares.

Now that all that was done, it was time for the biggest challenge. Rachel and I are trying to arrange a visit in September to the little nation of Burundi, in order to check out some possible future McCropder options. Since Burundi has virtually no tourism, they won't issue a visa at the border, and you have to get one before leaving from... the Embassy! Thankfully, they do have one in Nairobi.

But where? During our internet research, we found 2 addresses and no less than 6 phone numbers, none of which worked. We asked a ton of knowledgeable people, and no one knew. So, we stopped by the post office today, and asked if they knew. They looked it up and gave us an answer that matched one of our addresses, so we headed out. Five gridlocked roundabouts later, we discovered that it had moved, and five more roundabouts later, we discovered that they were open Monday through Thursday 11am-1pm. Since it was precisely at Thursday 1pm that we learned this, along with learning that we were missing about 4 essential items for a visa application, we headed back to the guesthouse, satisfied that at least we were the very first people in Kenya to learn where this elusive embassy is currently located.

Situations like this make us ask: Why don't they have a website? Why don't they have a reliable phone? Why are their hours so limited? The answer lies in the observation that the Embassy of Burundi in Kenya appears to be a single individual sitting behind a single table, and if there was a phone in the office, we didn't see it. Considering that this tiny nation is the 2nd poorest in the world, I guess we should just be thankful that they are there at all.

We keep learning.
Posted by The Drs. McLaughlin at 9:05 AM

Ummm,maybe it would yet be moved once again by the time you go back next week...