(Some of the Reasons) Why We Love Uncle Carlan

I think that if you asked missionary parents what some of their biggest fears are, or some of the biggest sacrifices to taking their kids to the missions field, one of the most common responses would have to do with health care for their kids.  We know missionaries that have moved to rural parts of Chad, India, and Tanzania, to name a few, and have been hours and hours of rough travel away from clinics and hospitals.  These are brave parents that have much faith.  Over the years, I have come to realize how unique our situation is, to not only have access to a doctor but to MANY doctors, not only access to a clinic but to a whole hospital which, while it has its limitations, is set up to provide most of the care we and our kids could possibly need.

Everyone on our team has their role to play.  Alyssa acts as the official "team physician" but the rest of us fill in for more specific situations (no one on the team has let me deliver their baby yet...ahem...).  When Carlan joined our team, we initially thought of him as another primary care doctor, but he has rapidly created an important new position and emergency room at the hospital.  We also had no idea how important it would be to have an ER doc as our neighbor.  Maggie actually stuck a bean up her nose last December.  I guess I always thought, who are these kids sticking beans up their noses and in their ears?  My daughter, I guess.  Carlan was able to fish it out with some random ENT equipment that we found on the bookshelf.

In the past month, we have had several more serious mishaps that Carlan has helped to patch up.  First, Sammy accidentally got his entire pinky fingernail ripped off while outside playing with rocks.  I have no training in fingernail repair, but Carlan was quite familiar with the necessary steps to making sure that the fingernail WILL someday grow back (seems to be a success so far). 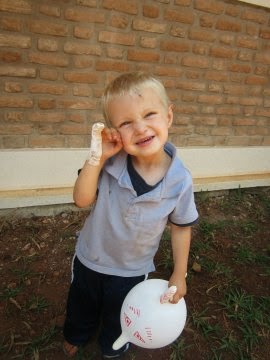 Then last week, Maggie fell off a retaining wall outside our house and we immediately suspected a broken arm.  We called him and he arrived to do a complete exam in less than 2 minutes.  He and Eric carried her up to the hospital, got an X-ray, diagnosed a "greenstick fracture" (like an incomplete break in an immature/young bone), made her a splint, wrapped it up with fun bright blue wrapping, and brought her home.  It was literally less than an hour since they had left.  I know of no place in the entire world where you can get care like that. 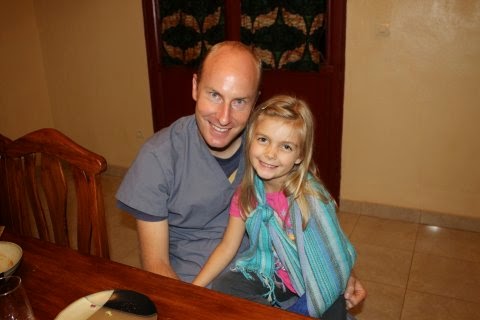 And really, he's very affordable. :)  He would probably see us for free, but in the interest of generating some more income for the hospital we did pay the specialist fee of 10,000 Fbu.  I would say that the care he provided was definitely worth the $6.50.  In all seriousness, we are so grateful for the protection that God has given our families, for the provision of equipment and doctors when there IS a problem, and for good med-evac insurance when the problem is beyond us.  We pray for much more of the same in the years to come.

Of note, I had just finished writing this post when John stopped by.  His face accidentally collided with a metal pole.  Guess who sewed him up?  Our team seems to be a bit more accident prone than usual lately... 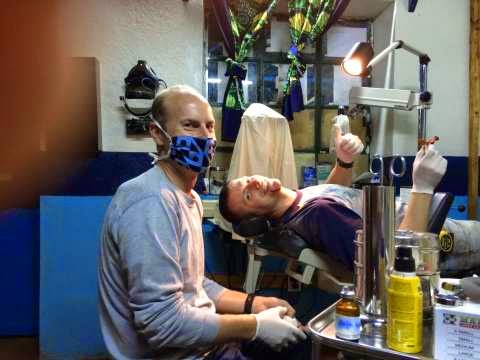 is it against the rules to be laughing at that last picture?

Oh my! I'm laughing and wincing at the same time. John, that is another post we would like to read. :)

What a blessing each one brings to the team! Way to go, Carlan! You also were an awesome host to Shawn in June!