COTW: It takes a village (or the world) to treat derm.

One of the groups of friends that we've made in Burundi over the years is called The Cries of a Child.  This group was founded by an American family a few hours from us, and they were among our first friends upon arriving in Burundi.  Among the different roles they play is running a clinic.  Among the professionals at that clinic is a French nurse named Lydie.  From time to time, Lydie finds some kind of extraordinary problem and sends pictures and questions to us at Kibuye.

One such instance was last October, when she send me the following picture: 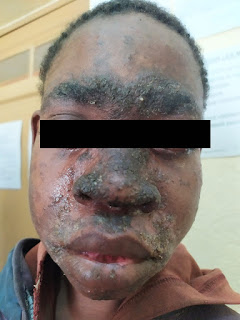 This young guy is 22 years old and has been suffering from the skin disease you can see since he was 12.  He'd tried everything he could find at different clinics but no luck, so he came to their clinic.  His eyes were also deeply affected by the same, and so Lydie was talking to John as well.
Given this severe and puzzling disease, as well as the long duration and failure in the face of every medicine we normally use, I decided to phone a friend.  Technically, I used Facebook Messenger, but I got in contact with an old med school friend who is a super smart dermatologist, Diana.  She has been gracious enough to field questions for me from time to time, and dermatology is thankfully the epitome of "a picture is worth a thousand words", or as a dermatology told me once: "My patients wear their pathology on the outside."
So I sent Diana this picture with a small summary and a "please help" message.  Her reply was "my first thought is chromoblastomycosis."  To which I thought "yeah, me too."  I would have if I knew an insane amount of dermatology.  I have since learned that this chronic and deep fungal infection needs really long term treatment, which could explain why he hadn't gotten any better.  Diana sent me a link, and I could also see the resemblance between the pictures and our patient.
So, Lydie started him on treatment, and today she sent me a picture four months later: 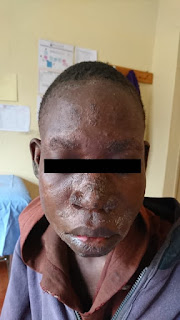 For some people, this may not look that great, and yes, he does have a long way to go.  But he hasn't looked this good in 10 years, and more importantly, for someone responding well to chromoblastomycosis treatment, this is exactly what you'd expect.  In other words, we're on the right track, and we have lots of reasons to keep hoping.
I really loved the dynamic of this case.  Small things lining up perfectly.  Other than perhaps Diana's extreme derm knowledge, there was nothing extraordinary.  It's friends from all over the world talking to each other, including some that I've known for almost 20 years.  It's realizing that a simple treatment taken (a lot) longer was the crux of what was lacking.  It's using the internet for good instead of evil.  It's a bunch of pretty small things that are perfectly arranged to make a huge difference in someone's life.
"Who dares despise the day of small things?"  Zechariah 4:10
Posted by The Drs. McLaughlin at 5:41 PM

A wonderful use of networking and the internet! Thanks for sharing. May the healing continue!