Last weekend was the 25th anniversary of the Global Missions Health Conference, normally held in Louisville, KY.  This year, however, the conference was completely virtual due to COVID-19. I was really impressed with the virtual format, especially since this was the first time they did it completely virtually. Over 2000 attendees logged on to a newly redesigned website to worship together, learn from each other, and get inspired about medical missions and God’s call for their lives.

There were some incredible plenary speakers, sharing about topics such as hearing God’s call to go to difficult places, the Christian response to the coronavirus pandemic, and dealing with mental health issues overseas.  There were some great times of worship, as well as a variety of different breakout sessions.  I led a breakout session about healthcare education as mission. 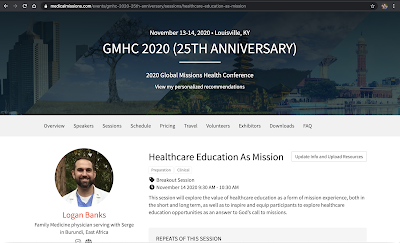 My hope was to inspire people who are interested in missions and global health to consider healthcare education as a primary way to answer God’s call to missions.  I shared about what we are doing at Kibuye Hope Hospital, with medical student education, the current stage professionnel (“internship”) program, as well as our desire to see FM and surgical residencies start in Burundi. I talked about how medical education multiplies the effect one person might have, because they are playing a role in treating all the patients that their learners will see in the future. I also discussed the value of discipleship and mentoring relationships that develop naturally as a result of education.

I used Moses’ interaction with God at the burning bush (from Exodus chapters 3 & 4) as an illustration of a way to respond to potential resistance to medical mission work in general, and specifically medical education missions. I don’t think the talk is currently available, but I believe all of the sessions will be uploaded soon at medicalmissions.com.

The GMHC is intricately linked to the story of our team in a number of ways. For example, Eric and Rachel actually met at the GMHC in 2003, so the conference serves as an anniversary of sorts for their relationship. The original “McCropder” team was officially formed at the GMHC in 2007, and it was through connections that were made there that they landed at Tenwek Hospital for the Samaritan’s Purse Post-Residency Program. I would be willing to wager that this connection to the GMHC is probably true for so many other medical missionaries.

Personally, I first attended the GMHC in 2008, when I was a third-year resident at Cox Family Medicine Residency in Springfield, MO. It served as an informal interview weekend as I was applying to the Via Christi International Family Medicine Fellowship. This fellowship led me to Tenwek Hospital and is where I first connected with the McCropders.

In fact, I remember that a strange thing happened at that conference.  I was listening to the plenary speaker talk about how important it is for God’s word to spread all over the world and how we need to be willing to take it there, even if it’s difficult, when I heard a word from the Holy Spirit say, “Learn French.”  I even wrote it in my notes.  But I had no idea what it meant.  I had studied Spanish, and had been on medical missions trips to Bolivia, and had always assumed that learning Spanish would serve me on the mission field someday. Little did I know! It was also at the GMHC in 2013 when Julie and I felt God stirring our heart towards long-term medical missions, and eventually led us to Burundi to rejoin the same team we had first met in Kenya.

God has a way of using this conference to speak in a unique way and guide His followers on the path that He is leading them. If you didn't get a chance to attend this year, I hope you will have the opportunity someday in the future.