(WARNING: the photos at the end of this post show significant facial trauma. You can stop scrolling once the text ends to avoid seeing my face split open.)

This is not the post I expected to write this week. My plan was to offer some reflections on home-building in rural Burundi and to highlight the work of so many precious souls who have crafted a lovely house for the Wendler family. Instead, I would like to tell you a story about how God builds character and community out of the strangest of substrates.

On Tuesday afternoon, I set up a ladder against the side of our house in order to install some security lights. As I made my way up the ladder, tools in hand, the base of the ladder shifted and slid out behind me. I fell hard in a kind of slapping motion, landing on the ladder with my face impacting a rung and the tile-covered floor. Conscious but a little stunned, I cried out in pain as I opened my eyes to see fragments of my two front teeth strewn in front of me and felt the warm rush of blood start pouring from my shattered nose (it was coming from my deep forehead and lip lacerations too, but I didn’t know that at the time).

Immediately, the two Burundian workers who were at the house with me ran to my aid. As I lay facedown on the ladder/ground, they called for help and assessed the situation in Kirundi that I could not quite catch. In what seemed like an impossibly short period of time, Michael Harling, our neighbor and, conveniently, a surgeon, was on the scene asking what I needed. Seeing the growing puddle of hemorrhage around my head, we both thought that something to put pressure on the bleeding wounds would be useful and Michael LITERALLY GAVE ME THE SHIRT OFF HIS BACK. Someone tied the shirt around my forehead like a bandana and when enough men arrived, they transferred me off of the ladder onto the ground nearby. Eventually they walked me into the house and sat me down on a chair, which was very kind but had the unfortunate side effect of making me feel very faint. I asked to lie down so that I wouldn’t pass out and they laid me on the floor again.

This is where I heard it. “Yapfuye. (He died.)” I honestly did not have the strength to muster a Monty Python-esque, “I’m not dead yet!” All I could do at that point was breathe and try to remain conscious. But I want to point out that at least some of these men feared the worst for me AND THEY KEPT WORKING TO HELP ME. Theirs was a type of saving faith — a belief that I could still be saved. And it is a gift.

At some point other doctors arrived, my neighbor Ladislas Mashimango, our team leader Eric McLaughlin, and John Cropsey brought a Land Cruiser as close as it could come. My “paramedic” team carried me from house to vehicle and someone drove us to the ER. Being recumbent had fortunately restored perfusion to my brain and I no longer felt like I was going to pass out, but it had the effect of filling my throat with blood and secretions, which I had to swallow or somehow spit out (not as easy as it sounds when your upper lip is ripped through the side and septum of your nose).

I remember Michael telling me that they were going to have to operate under general anesthesia to stop the bleeding and repair my face. I remember John asking me when I ate last and me talking about an oral-gastric tube to pump my stomach from the blood I had already swallowed. I remember the ER nurses, including one of the newest members of our team, Hosanna, taking vital signs and putting in an IV. It was a comfort to hear their voices. And as they transferred me from exam table to stretcher to go to the OR, I opened my eyes to see Ezechiel Bucumi, our househelper, standing next to me with a piece of cloth, wiping the spittle from my mouth as I tried to clear my airway. Ezechiel is wonderfully intelligent and hard-working, very capable (the French would call him “polyvalent”) but he has no medical training and I was a bit surprised to see him in the ER. He reminded me of Mary Magdalene and the other women who went to Jesus’s tomb that Sunday morning with nothing left but love in their hearts. Ezechiel never went to college or studied medicine, but HE WAS GOING TO DO EVERYTHING HE COULD TO HELP ME. His is a type of saving faith — a belief that he could somehow be useful. And it is a gift.

We got to the OR and the team worked through the pre-operative checklist. I remember everything up to and including the burn of the Propofol (anesthesia medicine) as it entered my vein. I know that I received absolute peak clinical care from our hospital — the best we are capable of (which is really quite outstanding by global standards). What I don’t know is if surgeons Jason Fader and Michael felt nervous operating on a teammate or if nurse anesthetist Pamphile Muvunyi was anxious about intubating his first white patient. Whatever their concerns might have been, they PRESSED FORWARD IN ORDER TO HELP ME. Theirs also was a type of saving faith — a belief that the instruction and experience they had received would be useful to save my face. And it is a gift.

The anesthesia and operation were successful. I’m recovering now and with time will again be able to breathe through my nose and eat a carrot. Before concluding, however, I want to return to that notion of how God builds character and community out of the strangest of substrates.

I think that in my spiritual walk I tend to think about my relationship with God as a diad - Him and me, giving and receiving, listening and talking, back and forth. I conceive of saving faith as something between God and the individual…and it is. But it strikes me as I recount this story of how God spared me from cosmetic and cranial disaster that He endowed many, many people with faith, hope, and love in the process. I wonder if there is not some analogy hidden in these events, a way of seeing relationships in community.

Some relationships seem dead or beyond repair. Some situations without any solution. “Yapfuye.” Is God calling me…you…to keep trying for reconciliation in hope and faith? Shall I keep praying for his salvation and keep hoping that she stays sober this time?

Some problems seem way out of my league or way beyond my comfort zone. Is God calling me…you…to show up anyways and look for any small task I can do to help? I’m not empowered in politics or public health but can I look out for my neighbor and make sure she knows where to find hope in times of trouble?

Sometimes the fear and anxiety rises within me to the point where I doubt everything. Is God calling me…you…to trust that what He has already given you is sufficient for today’s challenge? Shall I proceed believing that God’s word is true when it says it always accomplishes its mission? Shall I risk my marginally peaceful Facebook feed or my “gets along well with others” work reputation to confess Christ before others?

God is doing His work. He is saving souls and reconciling people to Himself and each other. He chooses to use people in this process, a privilege I will never be able to comprehend. May He grant me faith like my team of Burundian and American rescuers & caregivers showed. 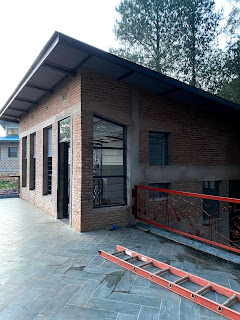 The culprit ladder and deck, washed clean by my Burundian rescuers. 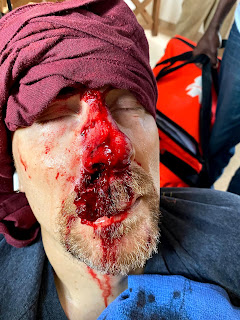 The aforementioned shirt-wrap and flapping lip. 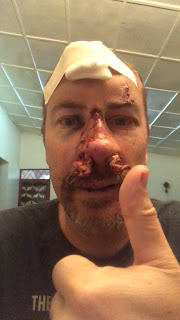 Thumbs up for skilled surgeons and anesthetists...and nasal packing. 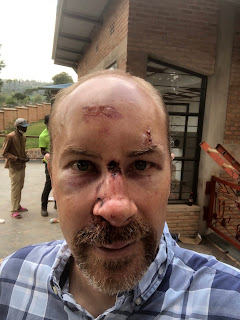 With all the dressings down, back at the scene of the incident.
I would be remiss if I didn't thank all of you who have been praying for my family and me during this time. We are humbled to dust by the overwhelming show of love and support that you have made. Thank you 1000 times over!

Posted by onewhostrives at 1:38 PM

So sorry to hear about your accident, Carlan! I hope your recovery is speedy and uncomplicated. What a blessing to read how God surrounded you with examples of His love and care in human form!

This paragraph you wrote was such a good challenge for me to read today: Sometimes the fear and anxiety rises within me to the point where I doubt everything. Is God calling me…you…to trust that what He has already given you is sufficient for today’s challenge? Shall I proceed believing that God’s word is true when it says it always accomplishes its mission? Shall I risk my marginally peaceful Facebook feed or my “gets along well with others” work reputation to confess Christ before others?

This description of anxiety and fear in our fallen world, and the temptation to put "peace"/ absence of conflict above truth, resonate deeply with me. Thank you for the reminder that Christ is sufficient for ALL our needs.

Oh Carlan! Shawn and I are glad you are okay. What a scare for Michelle. Ha ha! So typical that you can turn even this story into an object lesson describing God's love for us.

Oh Carlan! Shawn and I are glad you are okay. What a scare for Michelle. Ha ha! So typical that you can turn even this story into an object lesson describing God's love for us.

It doesn't even look like you. 😯Prayers for fast and complete healing.