Return of the Students

Ever since arriving in Burundi, medical education has been our number one priority at Kibuye.  We've helped hundreds of new doctors graduate from Hope Africa University in the last seven years, and watching students grow in their clinical knowledge and decision making continues to affirm our calling.  What many of you may not know is that during 2019, students almost disappeared from the hospital entirely.

Burundi currently has three medical schools: the national university of Burundi in Bujumbura (which is free to those who are accepted), Hope Africa, and the University of Ngozi.  Students would apply to each school separately that they wanted to attend, and HAU attracted many students from around the East Africa region as well as some Francophone countries in West Africa. Then the medical school admissions process in Burundi underwent some changes.  All students were now required to take the same entry exam and, based on their results, were assigned to a medical school to attend.  Unfortunately, as HAU and Ngozi are not free schools, not everyone who was assigned to these schools wanted to attend.  In fact, while all these issues were sorted out, there were almost two solid years where we had no new medical students starting at all.  Given the fact that they spend 3 years doing pre-clinical years in Buja before starting clinical rotations at places like Kibuye, we didn't notice the deficit right away, but early 2019 the students started disappearing...first from peds, then OB-GYN (two services that also have a strong presence at the university's clinic in Buja, where many students had already completed their required rotations), and then less so medicine and surgery.

When we started teaching January 2014, we each had about 4 students per service, all brand new.  But by 2019 there were routinely 8-10 experienced students on each service, doing admissions, taking call, and assisting in surgeries.  Their absence was a shock to our hospital system, where we were depending on their presence to fill in important roles in the work force.  Enter the idea for our stage professionelle program.  Little by little, we recovered from the absence of our students by hiring more nurses and training recently graduated doctors.  We found our new normal and there were a lot of blessings in the new system. 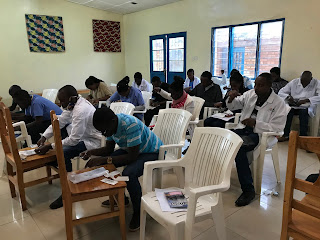 And then, finally, the students returned!  It began as a trickle this summer, but by early fall we had a quorum of over 20 new students starting their clinical years at Kibuye.  The current group will spend the majority of their next three clinical years here, as opposed to previous groups that would spend perhaps 4 months/year at Kibuye and the rest of the time in Bujumbura.  I was able to begin the OB course again (I'm losing count but this is at least the 5th group I've taught the class to) and we had both externs and interns on service (students who are brand new and students who have already completed their rotation on service and are returning for a higher level of responsibility and education), as well as 3 stage professionelles (SP) and generalists.  We no longer have to rely on the students so heavily to fill in personnel gaps, which frees them to be able to take time to learn well and ask questions.  Alyssa started up Bible Study for the students and we are all enjoying a chance to both teach new faces and watch our SPs develop as "consulting" doctors and teachers as well.  Looking back at my journal entries from 2019, it was a really challenging season on my service.  But now it's a great chance to look back and see how God has been providing for the hospital, and how the lack of students actually encouraged the development of other staff which will hopefully provide a more solid education for our students. 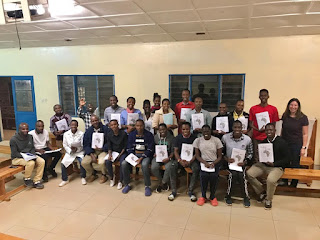 Posted by The Drs. McLaughlin at 7:52 AM

The swallows are returning...we love that! to change the face of healthcare.