These past 6 days, I have witnessed pure beauty.  The closest thing I can compare it to is the feeding of the 5,000, except we were given an impossible sea of blind people to treat.  The eye team of Kenyans (from Tenwek Hospital), Burundians (from Kibuye Hospital) and South Sudanese (Samaritan's Purse) cared for over 1,500 patients in Maban, Upper Nile State, South Sudan, and performed 512 cataract surgeries on some of the world’s most difficult cataracts (lots of band keratopathy and pseudo-exfoliation with zonular instability and tiny pupils - I call it Sudanese eye).  This region has no access to eye care.  The nearest ophthalmologist in Juba is a three-week journey by 4x4.  Thankfully we could be flown in by MAF (Missionary Aviation Fellowship). 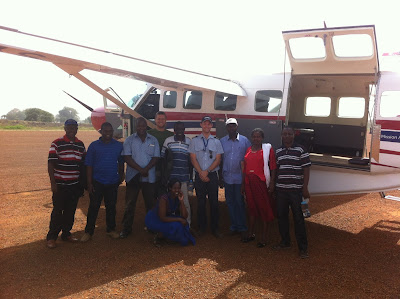 Maban is currently home to a massive refugee population fleeing active conflicts in South Sudan and Sudan just to the north.  The majority of the surgeries were for patients who were blind in both eyes and teetering on death’s doorstep.  Imagine being a blind refugee in a place where food and water are scarce, violence is endemic and the plagues of the earth freely reek havoc in congested, makeshift camps (HIV, TB, leprosy, dysentery, trachoma.…) with over 100,000 refugees struggling to survive in a land not their own.  In fact, several blind patients sustained significant injuries just trying to get to us.

Caring for that many patients in such a short period takes a coordinated, team effort which was spearheaded by Samaritan’s Purse and the Maban County Hospital.  The UNHCR (United Nations High Council for Refugees) provided three commercial buses for transporting patients by the 100’s each day from four large refugee camps and the "host" community.  MSF (Médecins Sans Frontières/Doctors Without Borders), the Red Cross and others also helped publicize and aid patients to the camp.

Here is how each day would start.  Examine the 80 - 90 post-op patients from the day before.  Organize the queue of 80-90 patients to be operated on that day who had already been previously screened.  Begin the surgeries while other clinicians would screen 200 - 300 new patients being bussed in by the UNHCR each day.  Here's a video of what that looks like.

Here are just a few of their moving stories:

David Sawe, Kenyan cataract surgeon extraordinaire, performed heroic bilateral surgery on all three kids in succession.
We praise God for all He enabled us to accomplish on behalf of the blind of S. Sudan on this trip.  I am also incredibly proud of this 100% African team (ok, I am a partial exception but my role was very small), in particular, its talented Kenyan leaders, David Sawe, Jarred and Brenda.   TIA (This is Africa) today folks, Africans caring for Africans.
Posted by John and Jessica Cropsey at 10:05 AM

Email ThisBlogThis!Share to TwitterShare to FacebookShare to Pinterest
Labels: eyes

Very nice to read about the week in Maban and to see pictures and movie clips.

Nepal Base Camp Treks (P) Ltd (team guide) are not only provide you a perfect holiday tour services, also here to organize your trouble less trekking holidays in scenic green hills to icy peaks where reachable on foot.
There are hundreds of best and fantastic trekking tour operators in Nepal, offer you to choose many popular trekking destinations in high Himalayas as, Everest Base Camp Trek, Everest Chola Pass Gokyo Lake trek, Everest Gokyo Renjo la Pass Trek, Annapurna Base Camp Trek, Annapurna Circuit Thorong La Pass Trek , Upper Mustang Trek,Annapurna Nar –Phu Hidden Valley Trek, Kanchenjunga Base Camp Trek, Manaslu Circuit via Tsum Valley Trek, Langtang Valley Trek,Gosaikund Helambu Trek, Kathmandu Valley Circuit Trek and untouched tourist destinations of Ganesh Himal Camping Trek, Tawal Earthquake Area Camping Trek, Upper Dolpa Trek, Makalu Base Camp Trek and much more… as you desirable.
If you are looking for perfect trekking operator and perfect guide who take care all your responsible and looking unexpected trouble free holidays in Nepal, our professional guides, Bibek Gurung, Buddhi Tamang, Anjan Waiba, Debman Tamang and female guide Pramila Lama are our young and 10 /12 year experienced license holder in Nepal Base Camp Treks (P) Ltd.
We are fully government Registered small group trekking company in nepal and trained under the ministry of tourism sector around 10/15 years. We operate only trekking in Nepal Himalaya and small peak climbing.
You are heartily welcome to Nepal Base Camp Treks (P) Ltd. to experience your wonder trekking activities in Himalaya with our team believes "providing good service" is our motto. Our team also believes not to regret your past, not to worry about future but let's enjoy the journey with us.

John, so glad that you did make it to S. Sudan, with all the peripheral technical and medical support needed to maximize your ministry there. Well done!
Jim Sutherland

Hey Dr Cropsey this is Olivia from Wills so very glad to see the great work you and your team is doing may the Hood Lord continue to bless you in doing this great work for the Kingdom!!! Miss you and will certainly keep you guys in prayer!!!!