Miracles continue to surprise me in the world of medicine…maybe they shouldn't anymore.  Last week I received a call at 5am that a patient who had received a cesarean section in the middle of the night was having heavy bleeding and my assistance was needed.  I came up to evaluate and found out that she had been transferred to Kibuye with a dead baby and and an actively hemorrhaging placenta previa (a problem where the placenta covers the cervix and a normal delivery is impossible and potentially fatal for mom and baby).  One of my colleagues had done a C-section for her in the middle of the night and he told me that there had been "a lot of bleeding" but by the end of the surgery the bleeding had stopped.  Now she was having a lot of vaginal bleeding, not necessarily signs of bleeding into her abdomen.  I've seen several cases where patients have a hemorrhage after a previa because the site where the placenta had attached to the uterus continues to bleed.  The uterine muscle is located mainly at the top of the uterus and can't "clamp down" as well near the cervix to stop this kind of bleeding.  I put several catheters into her uterus to compress the bleeding site and asked the nurses to check her hemoglobin.

An hour or so later, while I was sitting in the middle of teaching rounds with nursing and medical students, the nurse came in and handed me the results.  It took a few looks for the result to sink in.  Her hemoglobin, a measure of how much blood (and therefore oxygen carrying capacity) remains in the body, was 0.5.  I have NEVER seen such a number.  Normal is 12-16.  Most people are dead if they lose this much blood.  Less than 4-6 is an emergency, even in our setting.

The complications began.  It was obvious the patient needed blood.  RIGHT NOW.  She was virtually comatose and still having some vaginal bleeding.  Our blood bank was empty.  We called Gitega, the nearest bigger hospital (30 min away) about transferring the patient for a transfusion and better management.  They had blood available, but were out of the reagent to test for hepatitis on the blood, so they would not release the blood to anyone.  Many phone calls and much discussion ensued.  It was decided we could send the patient and the hepatitis reagent to Gitega, so they could check the blood and give it to her.  Excellent.  One more problem, though.  The ambulance (our only means of transporting her) was out of gas.  What?

Another series of phone calls and discussions ensued.  There was more gas, but no one had the key to the room where the gas was kept.  The man with the key was "not here." (in classic African fashion)  I pulled out my hair.  I thought about kicking the wall.  I resorted to (what should have been my first thought) prayer.  The patient kept breathing.  The man with the key showed up.  The ambulance left for Gitega.  I breathed a sigh of relief.  We got a call from Gitega that they would not accept the patient because she didn't have the $12 needed for a transfusion.  Someone made some other calls to higher ups.  Nine hours after my first 5am call, my nurse found me.  The patient was still alive.  She had gotten one unit of blood and was now being sent back to us.  WHAT?!  She needed at least 4-5 units!

Fortunately, Gitega did send a few more units of blood back with her, so we kept on transfusing.  She woke up and stopped bleeding and when I saw her on the second day after her surgery, she was sitting up and smiling.  I sent her home yesterday.  Miracle. 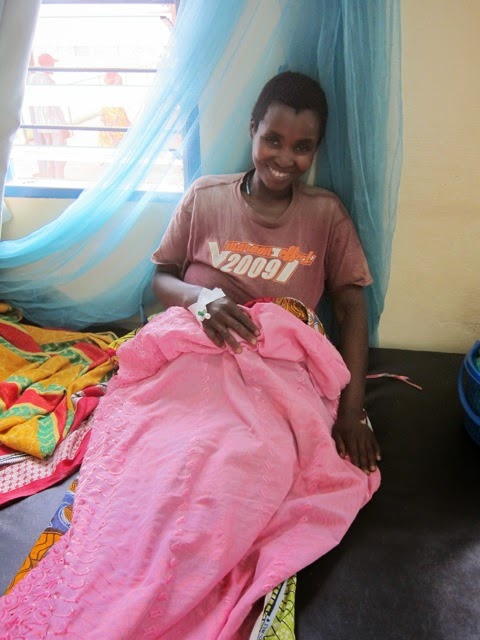 Posted by The Drs. McLaughlin at 4:22 AM