Christmas has arrived at Kibuye for the McCropders in the form of an enormous 20 ton red box! Our container is here! The container has been in Burundi for about 6 weeks but has been held up in customs and it finally was given clearance to come to us this week. Amazingly, the ministry of health requested that customs not charge duty on the container due to our service to Burundi - the customs officials initially said no to that - and then, inexplicably, changed their minds and didn’t charge us duty. Incredible! After the container was cleared, it took another couple days to identify a truck and driver - days full of rain and mud up here - and then the container made the final trek on Wednesday morning. After traveling from Michigan across the Atlantic and the Mediterranean, through the Suez canal, missing the boat in Oman, avoiding Somali pirates to arrive in Tanzania, and then traveling overland from Tanzania to Burundi, I think the last 3km were actually the most difficult part of its journey. We’re thankful that the 2 1/2 hour drive from Bujumbura to Kibuye is well paved until the very end. But the last few kilometers of dirt/mud created certain challenges for our container as you can see below. 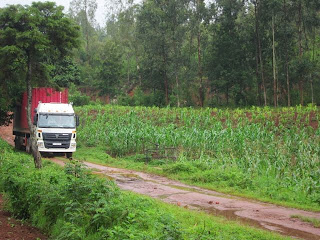 First view of our container coming down the road 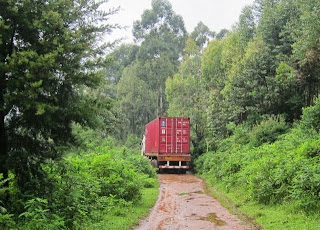 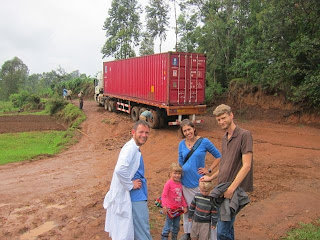 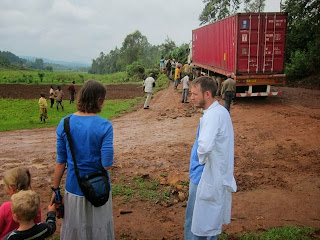 OB consultation on the road 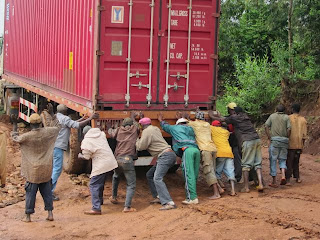 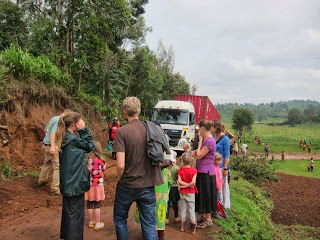 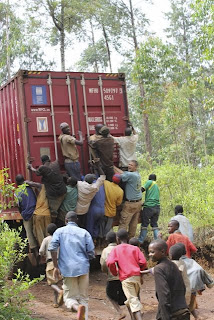 Can you find John Cropsey?

But, the small hospital-owned truck came to the rescue and pulled the large semi out of the mud. And then the unloading process began. Thanks to John & Jason’s hard work, there was no wasted space in that container. It took them months to get everything fit in there perfectly and we weren’t quite sure how long it would take to get it unloaded. But the truck needed to get back to Bujumbura and the container had to be unloaded before it could be tipped off the truck and placed on the concrete slab. A team of strong men worked tirelessly all day taking ~300lb crates from our container to our houses.  And there was much rejoicing as everything seemed to be intact and undamaged! It didn’t even rain to speak of - remarkable during the rainy season. Ropes were placed to keep the curious onlookers at a distance. The workers at one point asked what the washing machine was - they couldn’t imagine a machine to wash the clothes. Everyone on our team had a role to play in the unloading process. But we weren’t absent from the hospital completely. In the midst of the craziness, Jason operated on a post partum lady (after discussing the case with Rachel), Carlan met with the medical director concerning administering narcotics at Kibuye, and I lectured midwife students on examining a newborn. This really is perfect timing for the container’s arrival as hospital work ramps up to full time for us January 2. God has indeed heard and answered our prayers and our hopes in His timing! 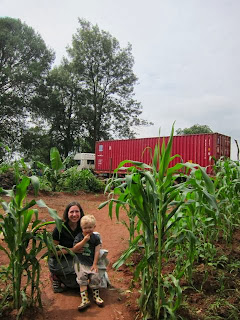 We all enjoyed watching for the container's arrival! 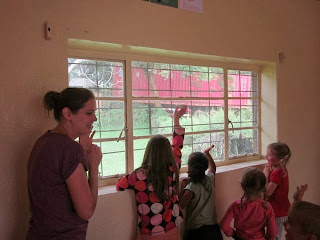 The kids were praying for the container's arrival just at the moment that they heard it going by their school window! 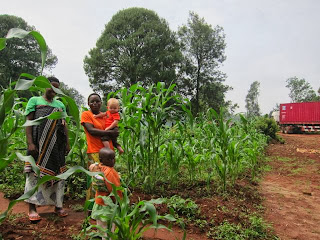 Even Toby watched the events of the day 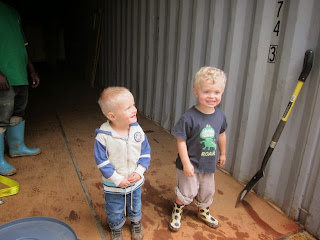 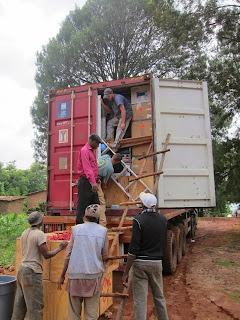 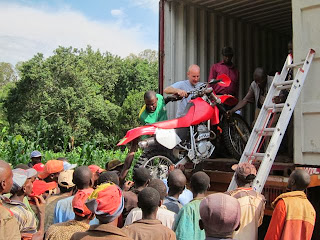 The most exciting event of the unloading for many 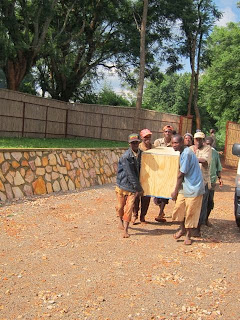 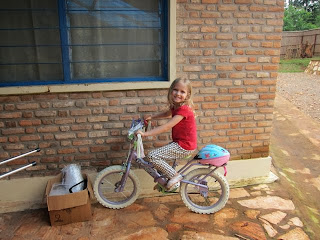 The kids are very excited about their bikes, too! 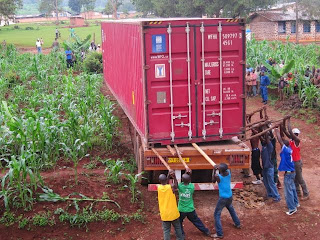 Preparing to tip the container off the truck 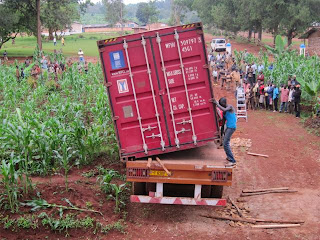 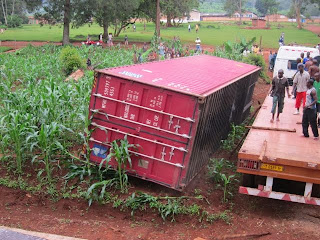 Sorry to the corn 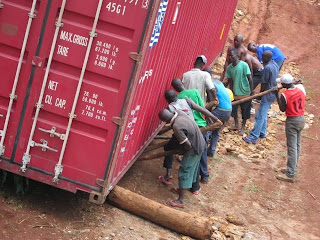 10 men with sticks/logs for levers moved an 8500lb container into place on the blocks. Incredible ingenuity of practical physics! 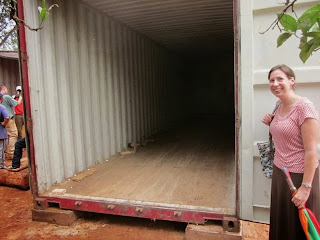 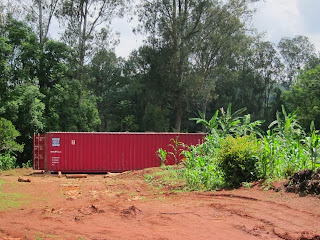 Container in its new home

As we unpack picture frames and familiar belongings - many of which we haven’t seen for years - it feels like we’re really settling in. We have officially moved to Kibuye now that the moving van has arrived. I realized in seeing teammates’ things that, while we’ve been close friends and teammates for 4 years now, I’ve actually never known them in a stable settled place. I’ve never seen the many McLaughlin musical instruments, Carlan’s homemade bookshelves, Cropsey’s furniture, Anna’s bike, or Jason’s tools. We’ve traveled for four years to Kenya, the US, France, Burundi with only what could fit in 50lb suitcases. What a joy it is to make this our home hopefully for many years to come! I also think of the many people making this event possible for us - our parents who stored our things for us and cheerfully helped us pack and move them to the container, my sister’s high school friend who has been praying nightly for our container to arrive as she feeds her newborn, the ladies in my church who threw a container shower for me before I left Birmingham, many friends at Knox Presbyterian church who have gifted us with games and folding chairs and so much else, and myriads of friends and family and supporters praying for this event and caring about these details. Urakoze cane (thanks very much)!
Posted by Alyssa at 10:00 AM