Advent, Promises, and Their Fulfillments

"Now there was a man in Jerusalem, whose name was Simeon, and this man was righteous and devout, waiting for the consolation of Israel." - Luke 2:25

Long ago, the wisdom of the Christian church decided that every year they would reenact the waiting of the coming of the Messiah, that it would remind us how to wait for his coming again.  And here we sit, at the end of that advent season.

Advent.  "Coming".  Coming of what?  The coming of that which was promised to us.  In the case of Christmas, it is the coming of a person, Jesus, but the fulfillment of every promise would flow in his wake.  God bringing his kingdom.

In a very true sense, our team has been celebrating the fulfillment of a promise since our arrival at Kibuye six weeks ago.  There was waiting.  There was unsettledness.  There were difficulties.  There was yearning.  There was a sense of God's calling, of his destination, but it was not yet manifest.  So we waited.  And it felt sometimes like it would never come.  It felt like maybe we should stop waiting, and start getting on with something more "useful".

Andrew Peterson sings: "It was harder than we dreamed, but I believe that's what the promise is for."  To sustain us in the difficult times.  And the more faithful the promiser, the more weight his promise carries.

And it's because it's hard to wait that we have to celebrate.  We have to celebrate and remember the fulfillment of the long waits, of the great promises, that we would learn to wait patiently and faithfully for the other promises that have yet to be fulfilled. 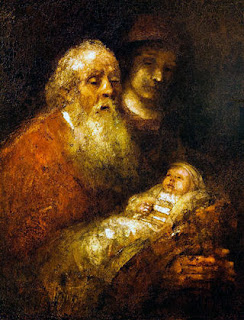 Simeon waited long for "the consolation of Israel", which seems pretty vague to me.  But even if he was specifically waiting for a Messiah, the misconceptions about Messiah-hood that abounded in Jesus' time would lead us to believe that Simeon wasn't expecting a newborn baby.

But then he saw him.

And the joy of a promise fulfilled was his.  It was joy enough.  For he knew that he could now die in peace, just having seen God's great promise fulfilled.  There is a satisfaction there that I rarely, if ever, can call my own.  Which is odd, given that I too believe that Jesus' birth was the coming of God's great salvation.

Consider, along with us, the places in your life and in the world where the final fulfillment of the promise has not yet come to pass.  Then, consider Simeon.  Consider Israel waiting thousands of years.  Consider us now at Kibuye.  Consider all the thousands of tiny advents that indeed have already come to pass.

"But when the fullness of time had come, God sent forth his Son, born of woman, born under the law, to redeem those who were under the law, so that we might receive adoption as sons." - Galatians 4:4
Posted by The Drs. McLaughlin at 3:10 PM