Sudan on a Wing and a Prayer

My trip to Sudan was the stuff dreams are made of.  Some of them are my own silly dreams, like operating in the middle of nowhere in blazing heat, barefoot, dressed in shorts, t-shirt, baseball cap and sterile gloves (too hot to wear a gown). 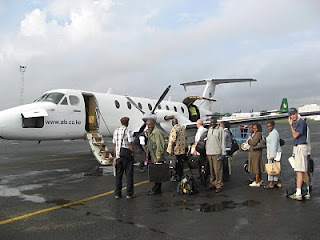 The first leg of the journey involved taking a twin engine plane to Lokichokio, northern Kenya.  Upon landing, you realize this is not a normal airport.  On the tarmac sits the Samaritan's Purse DC3 as well as a fleet of Cessnna Caravans with things like AIM AIR (African Inland Mission), MAF (Missionary Aviation Fellowship), Medecins Sans Frontieres (Doctors without Borders), and United Nations Humanitarian Relief painted on their sides.  Loki, happens to be the hub of most aid work flowing into South Sudan.  It seems to exist solely to run this airstrip, a lifeline into a vast land torn by decades of war. 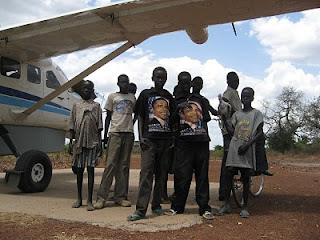 We hop into the AIM AIR Caravan for a two hour flight to Akot, Sudan.  The door opens and we are greeted by a blast of 100+ degree heat and a group of enthusiastic boys.  One has an AK-47 while two others proudly adorn identical Barak Obama t-shirts (Obama's Luo tribe in Kenya migrated from the Sudan centuries ago, and he is thus part of their family too).  I decided it was best not to take a picture of Mr. AK-47. 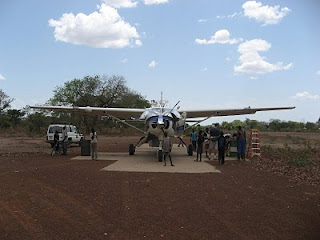 We quickly refuel the aircraft with a hand pump and two 50 gallon drums because our pilot has been asked to medivac out a child 30 minutes away who suffered a gunshot to the face during a cattle raid by an opposing tribe.  He underwent reconstructive surgery at Kijabe Mission Hospital in Kenya. 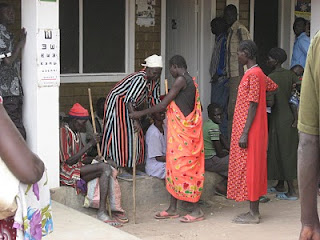 We then head to the mission hospital just off the airstrip to begin seeing the blind that have already arrived on this Saturday afternoon. 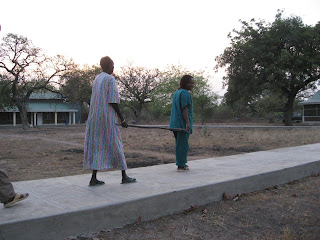 Most are led by a family member, often a small child as young as four or five.  The child leads by one end of the stick, and the blind person follows by holding onto the other end.  We quickly identify 11 patients needing surgery while half the team has already begun setting up the "O.R." in an empty clinic room. 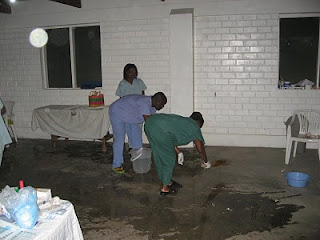 We want the first round of patients seeing as soon as possible in order to spread word through the community.  We felt this would be important for mobilization for the week to come as many blind were hesitant to travel due to the recent violence mentioned in my prior blog.  Did I mention the SPLA army barracks happen to be at the other end of the airstrip?

By mid-afternoon, the O.R. has been prepared and we are able to do all 11 cases! 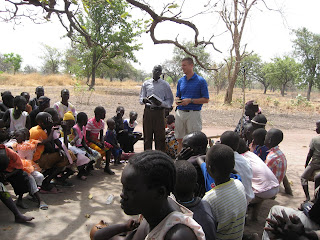 Sunday morning everyone was doing well.  One lady in particular stood out.  She wore a bright green dress and scarf.  She had been blinded in both eyes by dense cataracts.  As soon as her bandages came off Sunday morning, she looked down and exclaimed, "What am I wearing, these aren't my clothes!"  Later that morning on the way to church, we passed her in the bush in our pick-up.  We stopped 100 meters after seeing her to give her a ride.  She then RAN and JUMPED into the bed of the truck.  I have it on video!  Only a day earlier, she was being led around by a stick blind as a bat in the bush of Sudan.


Sunday, I had the privilege of being invited to be the preacher of a bush church which meets under a big tree.  With just a few minutes to prepare, I prayed for the Spirit to touch my tongue!

Monday, clinic was packed!  This was due to the prayers of many of you, the good report of those done Saturday, and the hard labor of the community health workers months in advance to our arrival (Reuben, Josiah, and Joy).  Despite hearing gunfire the first three nights, God enabled us to perform 101 surgeries in six days.  Our prayer was to reach 100.  I'd love to share a few specific stories 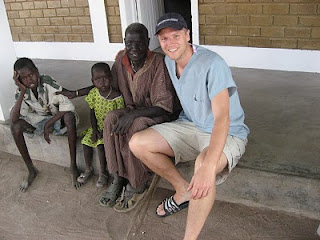 When I was a young boy, my dad once told me of an old Togolese man who had never seen his grandkids.  That is, until his cataracts were removed.  Watching that grandpa see those kids was one of the most moving moments in his medical missionary career.  I've always dreamed of getting to see that happen.  To the left is a grandpa I had the honor to operate on who had been blind for decades.  His grandson had lead him with a stick and was known for his big, pink gums when he smiled.  This is grandpa taking in the moment, seeing the big, pink gums for the first time. 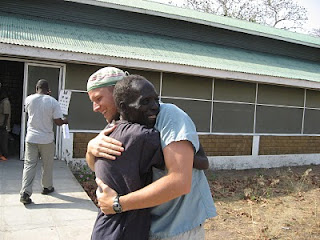 We also had the opportunity to restore sight to a Spear Master.  These are priest like men in the cattle camps.  Legend says that they arise out of the Nile, they are not born.  Traditionally, they are buried alive when the Spear Master alerts his tribe that it is time.  Yikes!  Each morning as we removed the patches, men and women would burst into spontaneous singing.  His was especially animated.  Here we are hugging after his vision was checked.  He was deeply touched by God's gift of sight being regained. 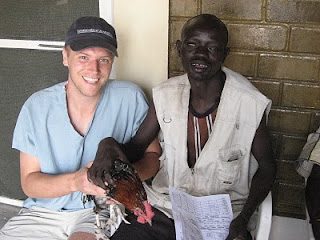 Michael is a 32 year old teacher who came to clinic completely blind in his right eye with 95% of his vision gone in his left eye as well.  He could no longer read, but could still walk slowly without assistance.  Glaucoma had robbed him of his sight.  It is irreversible.  His eye pressure was extremely high.  Without intervention, he would surely lose all vision.  I attempted a surgery which proved very difficult, but was working very well on my departure.  However, in the weeks and months to come, it has a high likelihood to fail, especially as I did not have the normal tools used to improve success.  Please pray for him.  He also gave me a beautiful rooster.  Another dream of mine, to be paid in livestock. 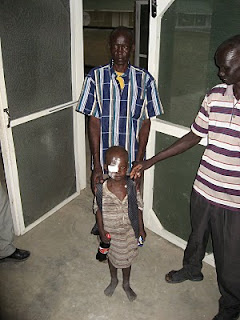 As we finished our last case, #100 for the week, a 4 year old boy arrived with a traumatic cataract with a scarred corneal laceration from a stick injury.  We had no anesthesia to offer except a local injection.  With much prayer and bribery (coke and treats), the child allowed us to administer a retro-bulbar block.  He did not move during the entire surgery until I placed my last suture!  He then totally broke down.  If it had happened a few minutes earlier, it could have been a disaster.  On our return to Kenya, a fellow missionary said she had been burdened to be praying that very day for a young boy to come out of the Sudanese bush for the eye care he needed before we left.  "We don't believe in miracles, we depend on them." - source, my dad (missionary surgeon), proven true a million times over by medical missionaries around the globe, century after century.  There are many things on my heart and mind after experiencing Sudan, but alas, it is very late.  I must sleep.   Thank you for your prayers.  I am so happy to be with Jessica, Elise and Micah again.
Posted by John and Jessica Cropsey at 6:23 PM

What an awesome experience John! I can only imagine how good that must have felt to see all those people seeing for the first time. I pray that God will continue to work in their hearts! Glad you're safe too!

Wow. It makes me want to be an ophthalmologist. Great narrative, too.

Your story brought tears to my eyes. God Bless all of you! Your stories are so uplifting, I look forward to receiving them.

Oh my goodness, John! That experience of yours was amazing! I was crying and laughing as I was reading. You are not only a great renegade doc like your ole man, you are a most excellent writer too. WOW!!!

yeah! so exciting! we are thankful for your faithful service.

Thanks so much for sharing your stories, John. I'm moved and thrilled for the good work you're all doing there.

I only wish your group needed a lab tech and I had the courage to join you. I thank the Lord He has given me the honor to know you and Jess and to be able to pray for you and your family. I'll make sure the Whitman/Pennsport prayer group also keeps you in prayer. I love reading the posts from all the McCropDers, must be my science geekiness.

I don't even know you, John, yet you move me to pray even more for your team. I am thankful to know you through the blog...ask Jason and Heather...they know who I am. Your skills have planted a seed in the hearts of men for the Living God. Bless you!

Ps 146:8 the LORD gives sight to the blind,
the LORD lifts up those who are bowed down,
the LORD loves the righteous.

may God continue to bless you and all the McCropDers and lift you up!

what amazing stories of God's goodness!

I needed to read this today and be reminded of good work happening for HIS KINGDOM around the world.

Praise God for the wonderfully weird dreams of a godly young boy! And praise God for His faithfulness in bringing them to fruition.

Praise the Lord you all. What a sweet privilege to have spent at least a tiny part of your medical journey with you. You have been a tool for Jesus during every leg of it. I'm so happy.

Praise God. Thanks for sharing the stories. I met the Cropseys at Tenth Pres and just got back from my own two months in Zambia and a month in India as a fourth-year med student. Have been very encouraged by following your blog. Thank you.