I (Jessica) have been teaching math to a small class of 6th-grade missionary kids for the past month.  Amy Bemm had been teaching the class, but was eager to pass it off to me since it wasn't her field of expertise.  She has since started a little "pre-school" class for Elise, Anna Fader, and two other missionary kids that meets at the same time.

As some of you know, March 14th is "Pi Day".  (Pi is approximately equal to 3.14 for the non-math savvy out there.)  Since this year's "Pi Day" fell on a Sunday, we were forced to celebrate on Monday.  Nevertheless, the kids were eager to make a special event out of it.  During class time, each of the kids presented their "Pi Projects" which were done on circles split into quarters -- the history of pi, the uses of pi, the digits of pi, and interesting facts about pi.  Then, we did a little activity exploring the circumference and diameter of various sized circles (the ratio of C/d should equal pi).

My little math geniuses (from left to right):  Peter, Joel, David, & Abby
P.S.  In case you were wondering, Joel & David's projects were done on circles, they just didn't cut them out! :) 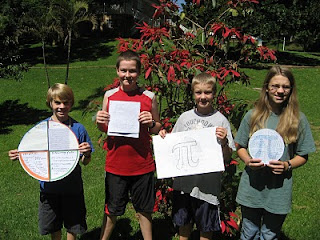 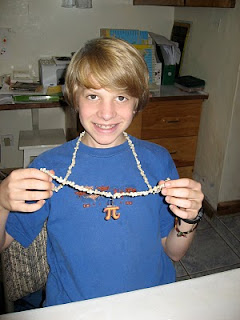 During the lunch hour, we had a "Pi Party", complete with pizza pie, coconut cream pie, and pretzels in the shape of pi.  The day brought much joy to the math nerd in me! 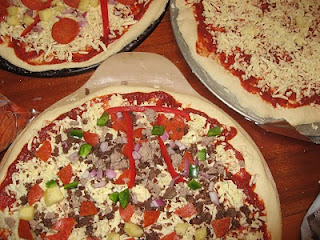 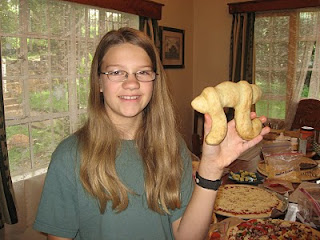 For the fellow math nerds, here are a few interesting facts about pi that my students discovered:
*Pi Day is also Albert Einstein's birthday.
*If you were to print a billion decimals of pi in ordinary font, it would stretch from NYC to Kansas.
*As of January 2010, 2.7 trillion digits of pi have been calculated.
*Akira Haraguchi of Japan holds the unofficial record of memorizing 100,000 digits of pi.
*There are no zeros in the first 31 digits of pi.
Disclaimer:  These facts have not yet been verified by the teacher! :)
Posted by John and Jessica Cropsey at 9:22 AM

1. Having celebrated Pi Day as a nerd in the US for the last couple years, it's important to note that the idea is somewhat lost on Kenyas, presumably because they write the date 14/3, and thus it doesn't really look like Pi.

2. Lydia Bemm had so much of your yummy Pi lunch that she apparently only had room for an apple for dinner, and barely that.

Halfway around the world from your budding geeks, MIT announced their admissions list on Sunday -- I bet you can guess what time.....

Abby and friends made pies to eat in Math class today: all of theirs dessert pies, though.

Google changed its logo to a special 'Pi Day' logo, and it was just for you, Jess. :) I love your math-nerdiness!

We're praying for you guys and love all of your updates!!

this is just pure awesomeness; it appeals to almost every fiber of my being (except that I don't like pretzels). great to see your hubby yesterday too! we wish him a speedy return to his family!
jay and laura