St. Patrick’s Day was this past week. I hope everyone wore green! Even though it’s only a few days after St. Patrick’s Day, I’m reminded as I write this of a different holiday - Halloween. On Halloween of last year, I landed in Bujumbura for the first time and began what I had been working toward for many years.

Let me introduce myself. My name is Benjamin Roose. I am a new general surgeon working at Kibuye Hope Hospital.

I hail, like several from the team, from Michigan. I grew up near the ring-finger middle knuckle and, though I spent my college and medical school years in Ohio, I returned to Michigan for general surgery residency at St. Joseph Mercy Hospital.

That particular hospital happens to be where Jason Fader and Ted John trained. It met Ted there as he was three years ahead of me in our surgery program. Through Ted, I learned about Jason Fader and surgery at Kibuye. As I became friends with Ted and listened to him share his excitement about what was happening at Kibuye, I began to want to go there myself.

I spent several short term trips at other mission hospitals which strongly influenced my desire to work in that setting. I was accepted into Samaritan’s Purse’s post-residency program and made plans to follow Ted abroad. I spent a year and a half working in southern Illinois, and then went to Switzerland for six months to learn French. This all led to finally, on Halloween of 2021, landing in Burundi for the first time.

In the past 5 months I’ve learned so much! The challenges are endless. However, I’m blessed to have excellent leadership and colleagues in the surgery department. More than that, I’ve found the community here Christ-like and welcoming. I’m happy to be here and glad to finally introduce myself to all the friends of Kibuye through this blog! 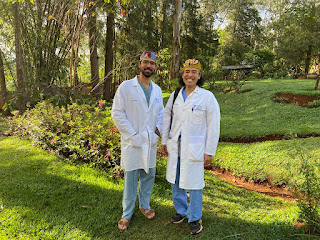 The band gets back together… Me and Ted on my first day.
Posted by Unknown at 7:30 AM