The children on our team get a great deal of exposure to the practice of medicine.  Many of them have physicians or nurses for parents.  Their neighbors (and therefore "aunts and uncles") are healthcare providers.  They get regular opportunities to visit the hospital, and occasionally to do a bit of light wound care.  And now, thanks to Wilderness Medicine Club, some of them know how to suture, how to evaluate for cervical spinal cord injuries and what to do in case of a snake bite, grenade attack, tornados and bear encounters, among other things.  Because you can never be too careful.

Alyssa and I signed up to lead a twice a month Wilderness Medicine Club over the past several months for three of the middle schoolers.  It was a lot of fun, using a combination of didactic teaching, workshops, clinical scenarios and YouTube videos. 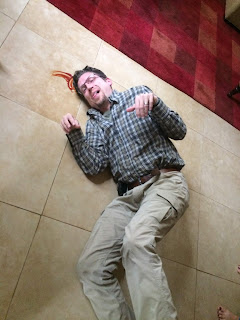 This was day one of their training.  They wandered upon this poor victim who had apparently just experienced a head trauma .... while opening a bottle of ketchup.

On the final day we held a "mega-code" creating the perfect storm of disasters to which the students had to respond.  Jimmy the mannequin (who normally lives in our closet but occasionally makes an appearance to frighten team children or our house helper) was minding his own business, walking along the edge of a wall (which his parents had told him not to do), when he took a nasty tumble, had a head injury, then went into cardiac arrest, then (after being successfully resuscitated) was found to have an open tibia fracture.  And then, wouldn't you know it, a snake came out of nowhere and bit him.  We opted out of adding in a tornado scenario, as they are quite rare in Burundi. 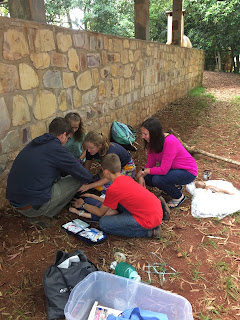 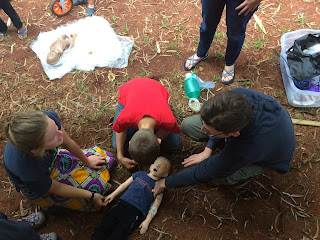 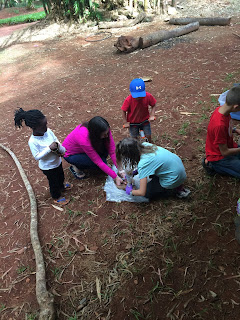 Some of the smaller children came across this traumatic scene and were very curious. 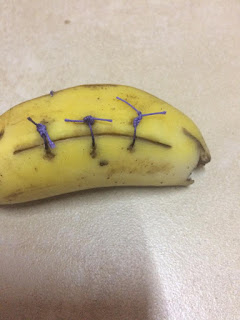 No scar revision will be needed for this banana!
Posted by Gregory Sund at 8:07 AM

What a great way to learn some important skills!

Greg, this is awesome! What a playful way to give them skills they will likely use one day (hopefully not too soon!).