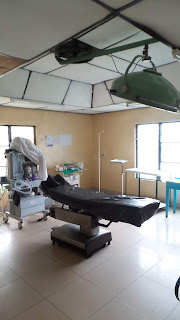 If you've been reading our blog for awhile, you've probably seen a fair number of surgical photos.  When we started working at Kibuye, the two ORs had already been in use for probably about 30 years.  Those ORs have a lot of stories to tell, many of which happened before our time.  In 2013, there was one nurse anesthetist and maybe 50 cases were performed each month, many of which were C-sections.  The scrub area was a bucket and a pitcher.  Almost all surgeries were done under ketamine (rarely used in the US adult setting).  One room had a ceiling mounted surgical light, and the other had a light on a metal stand that we would try to position over the incision.  The power went out frequently, and I rarely operated without a head light.  Despite limitations, many patients were helped and many lives saved.  In fact, many lives entered the world in those rooms!  The equipment has slowly been expanded and upgraded, but as the surgical volume has continued to grow these past five years, it became clear to us that it was time for an expansion. 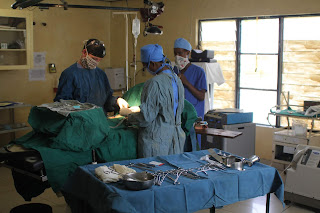 Starting last fall, two new ORs were constructed alongside the old ORs.  The noises of hammering, sawing, and welding were frequent accompaniments to the OR music.  The first weekend of February, most of the surgical team showed up to help clean and move the equipment from the two old ORs into the new rooms.

The new rooms are so clean and bright!  New lights on the ceilings!  New scrub sinks!  It has been a real pleasure to work in such beautiful spaces.  After we moved out of the old ORs, they too were renovated.  One opened the week of the visiting ortho team in March.  The other is slated to open sometime this month, along with a dedicated room for endoscopies. 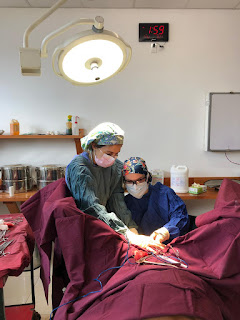 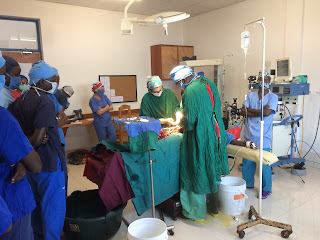 With the increased space and number of surgeons, surgical volume has skyrocketed, with close to 300 cases being performed last month.  This can be both good and bad--many more people being helped, but an increased strain on our staff, and the need continues to increase.  In a country with so few surgeons, the demand will likely always be greater than the supply.  Many more staff have needed to be hired to prep patients, set up for cases, circulate, clean and sterilize equipment.  It's also been a pleasure to welcome many new anesthetists to work with Greg in order to provide safe anesthesia.  They have continued to work long hours in order to help as many patients as possible.
Please pray with us that these ORs would be a blessing to many.  Pray for lives to be changed.  But also pray for wisdom for us to steward these spaces well, to have perseverance on the busy difficult days, and to have grace and understanding when we need to say no...so that we can continue to function and provide quality care for many years to come.
Posted by The Drs. McLaughlin at 9:51 PM

This is exciting! Congratulations on your new ORs! God is so good!