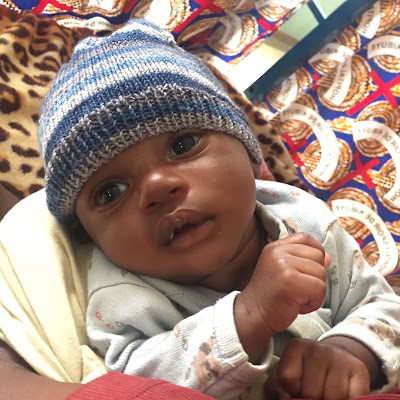 About 5 months ago, a baby boy was born in a field just up the hill from our hospital. For reasons we will never know, the mother left the baby there and disappeared. Thankfully, a hospital worker heard crying, and found the baby very shortly after, and quickly brought him to the hospital.  Our pediatrician checked him over and miraculously he appeared to be healthy. Due to the risk of being born and left in a banana field, he was put on a course of IV antibiotics to make sure he didn’t contract an infection.

Like all the patients at Kibuye Hope Hospital, this baby was required to have a caretaker. Someone to be with the patient at all times, to help with their care.  Since this little baby had no one to take care of him, some of the other mothers in the NICU pitched in to help. Despite needing to care for their own premature babies, they helped with his feedings and care for him for the first couple of days he was there. We knew we needed a new plan to care for this precious baby. By this time, I had started calling this sweet orphan, Baby Moses.

The book of Exodus contains a beautiful adoption story of a Hebrew woman who had a son at a time when
the Pharaoh ordered all Hebrew male infants to be put to death.  Instead, the Hebrew mother found a basket, waterproofed it,  placed her son inside, and gently sent him down the river.  Not long after, one of the Pharaoh’s daughters caught sight of the basked and retrieved the young baby.  She eventually adopted him into the royal family and named him Moses (Exodus 2:1-10).  This is the same Moses who grew to be an important leader, a prophet, and a faithful servant of God. It's a story about a child being rescued from certain death, a story of God's providence, but also a story of the compassion and care of this Princess.

At the same time that Moses was in the NICU, there was an 8-year-old with a terrible bone infection recovering in our surgical ward.  Clairia had been in the hospital for many months at this point and had endured several painful procedures and surgeries.  I had gotten to know Clairia and her mother quite well after spending time visiting and playing with Clairia each day.  It’s common here to refer to women as “Mama “ + the name of their oldest child. I admired Mama Clairia. She was quiet, gentle, patient and faithful.  She was right next to her suffering daughter every minute of the day, holding Clairia down during painful dressing changes with tears in her eyes, and comforting her in quiet whispering and prayers.

When I explained to Mama Clairia that we had a 2-day old baby with no one to care for him....there was not a moment of hesitation.  She said that if she could remain in the surgical ward by her daughter’s side, then she would be happy to care for Baby Moses.  Now she not only cared for her sick daughter but for a newborn.  She never complained.  She never asked for anything.  She had spent months in the hospital, away from her home, her husband and her other 4 daughters, and now cared for a newborn. Yet she was content. I have learned so much and still have so much to learn from this faithful and beautiful, strong and quiet woman.

She treated Moses like only a loving mother could. Changing him, feeding him, singing softly to him, whispering in his ear. Burundian culture has a special ceremony for the first time a baby is tied to its mothers back (where it will spend the majority of the next year!) I had the privilege of being there when Mama Clairia tied Moses on her back - caring for him as her own.

After spending 6 full months in the hospital, it was finally time for Clairia to leave our hospital and return home.  Before they left, Mama Clairia came to me and explained that she, too, was an orphan.  She told me that she believed Moses was still far too young to leave in someone else’s care, and that she really wanted to continue caring for him in her home. She told me that if she had to give him up, that her heart would break.  Moses was 3 months old when he finally left the hospital grounds for his first time ever and got to go home....his new home.

Every Friday I have the privilege of seeing sweet Baby Moses, as his foster mama brings him back to the hospital to collect more formula that we have been providing for him.  He is growing and thriving...and is loved.

A few weeks ago, our family ventured out one Saturday morning to find the home of Mama Clairia and Baby Moses.  Even though we took someone with us to translate who was born and raised in this area, it was still not really possible to understand directions. So we arranged to meet her at the closest road. She jumped in the back of the truck (with Moses on her back) and lead us the rest of the way.  We followed a series of small dirt paths, each getting consecutively smaller until finally, the Land Cruiser couldn’t fit anymore. We parked the truck there on the footpath, bananas on one side, coffee bushes on the other, and followed Mama Clairia to her house. 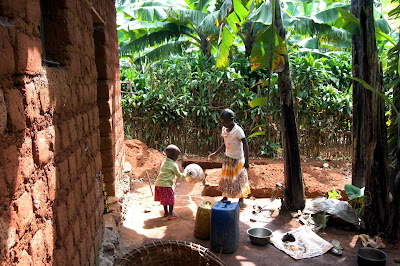 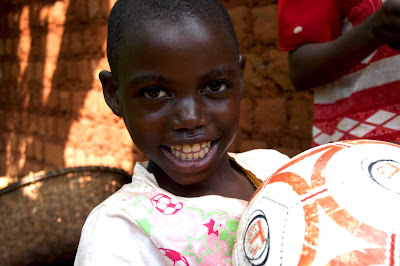 Their home was a small, mud-brick home, with a neatly swept dirt yard surrounded with a fence of woven sticks. We ducked through the short door, to be greeted in the one room. It was maybe the size of our girls' bedroom. But instead of housing two girls beds, their clothes, books and space to play - this room was everything. This is where the eight of them sleep, where they eat, and where the girls do their schoolwork. There is a small room off the back of the house for cooking and a little hallway that connects the two spaces, which they use to store a few hoes and small cook pots.

They gathered up enough chairs from neighbours so that we could sit in their neat, one-room house. They told us how happy they were to have Moses in their family. How the girls adored having a brother. How Papa Clairia didn't hesitate when his wife told him about the child. As we sat and visited they told us about their hope that Clairia will be able to return to school this fall, and how they hoped they could find someone to sell them milk for Moses. Like most families around here, they struggle to feed their children. They don't have luxuries like running water or electricity, and they work hard to just survive. Yet this couple was eager to extend what they had, to help care for this child who had entered the world in such dire circumstances. 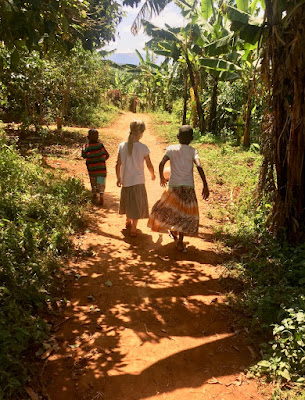 Their family insisted in walking us back to the truck, and as we did Alma and Clairia ran up ahead. To see the two girls, my daughter and a  girl who had been immobile, in horrible pain, and sad for so many months, skipping down the path was a gift I can't describe.

There are a lot of hard things here, and getting to glimpse just a little bit into the lives of Claria, her sisters, her mother and father, and her new baby brother help me to see that in a new light. Both the extent of difficulties, the depth of sorrow, the complexity of poverty - but more importantly the joy of hope, and the light of love.

I don't know much about Egyptian princesses, but I find it hard to believe that Pharaoh's daughter had anything on this woman. Mama Clairia did not take in a child to care for in the lavish excess of a palace, but she truly sacrificed what little she had to take him in. She has no servants and attendants, and unlike Pharaoh's daughter, she doesn't send to find a woman to help care for the child. She walks all the way to our hospital every week. She cares for him. She literally carries him.

I don't know how this story will end. In a place like Burundi, it really could go so many different ways. But what I do know is this woman, who grew up an orphan, who now lavishes care and love on six children has taught me so much.

What sacrificial love it.

What a beautiful story!! Thank you for sharing!

This is an amazing story of sacrificial love and caring for others! This story shows that no one can complain that they do not have enough to share or room to take someone in when this family does not have even half of what we have here in America.