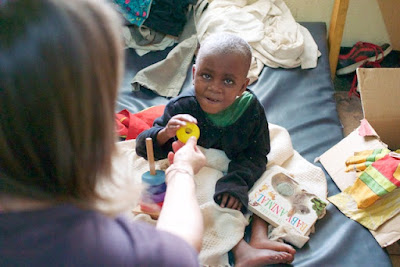 What i'm about to tell you is a love story.  This is one of the greatest love stories I've ever experienced.  It involves unconditional love, costly sacrifice, incredible patience and perseverance.  But this is not your usual love story.  This is the love story between a young a very  sick little girl and her older brother, and I have been deeply blessed to have seen this love story up close. 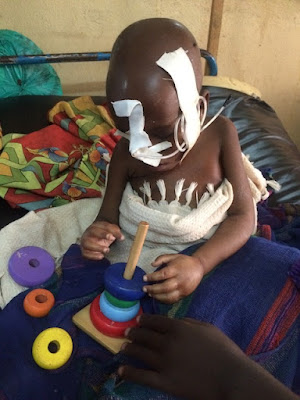 5 year old Divine came to our hospital at the end of December and was admitted for severe malnutrition. Really, really severe malnutrition. For weeks, she lay in bed, barely conscious and barely alive. Her mother was unable to stay at the hospital, and since our hospital requires each patient to always have a caregiver, her brother was given the job of caring for little Divine. From that point on, her 12 year old brother, Moise, was always at the side of her bed. 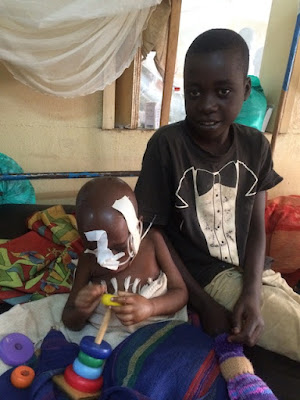 He did jobs that I have never seen any 12 year old boy do before; change his sister, clean up diarrhea, wash and clean his sister, feed her, give medication, and sleep next to her (in the same bed, often with other patients) in a very crowded room filled with lots of fussy, malnourished babies and toddlers and their care-givers. 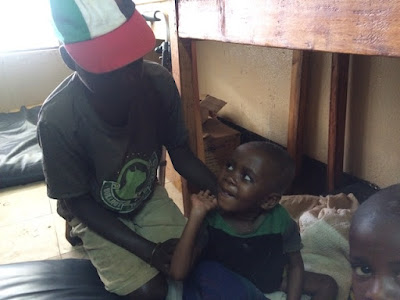 Weeks after she had been admitted,  I walked into the room one day and found her sitting up in bed.  I was shocked.  She still had a feeding tube in and was still on oxygen...but for the first time, I felt like she was going to make it.  For the first time she was interested in playing, and even though she was extremely weak, she was determined to pick up blocks and try to throw a toy at me. 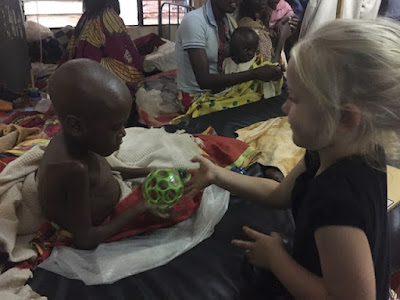 Divine had a type of malnutrition that is a bit deceiving to those of us that don't have a medical background.  She actually looked a bit chubby.  Her body was puffy and swollen, due to a lack of protein.  As she was fed a high protein formula through her feeding tube over the next few days, her swollen body dramatically changed. She suddenly had a tiny little body that looked like pictures that I have only seen in my high school textbooks of holocaust victims.  Just looking at her tiny little skeletal frame, my throat would tighten and would get choked up. 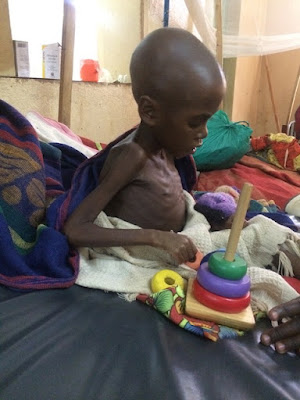 Divine is special.  She has some developmental delays, that mean that although she is 5 years old, she has never walked and has never clearly spoken.  I feel certain that if Divine had the help that we offer in Western countries;  therapy, special education, healthy food etc. that she could thrive.  However, there's not much aid for special kids like Divine here in Burundi, so I can only imagine that most days Divine sits on a mat in their mud hut, neglected, while her single mother is out working in fields, fighting to get enough food to feed her hungry kids. 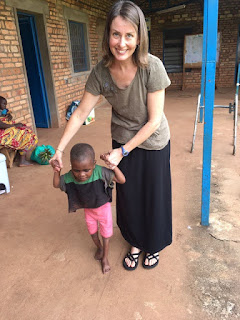 Almost every day for 4 months, I visited Divine and played with her.  Moise was never far from her bed.  Boys his age should be in school and outside playing soccer with their friends, but Moise patiently sat by her bed, tenderly caring for his weak sister.

He was never embarrassed of his sister, but would clap and cheer and rejoice in her progress.  During those 4 months, we saw some amazing changes in Divine.  She grew stronger, was eating more, was more talkative, was working with our hospital's physiotherapist, and was actually able to start walking with the aid of a walker. 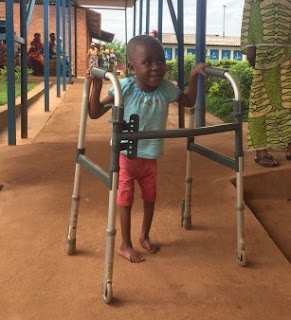 Of course, she had some setbacks, like coming down with malaria and another infection.  In spite of the tough times, it was exciting and rewarding to see her gain weight, strength, and see her play and smile every day. Moise became a strong voice and an advocate for his sister, pushing for his little sister to get more physiotherapy time, and be able to borrow a walker. 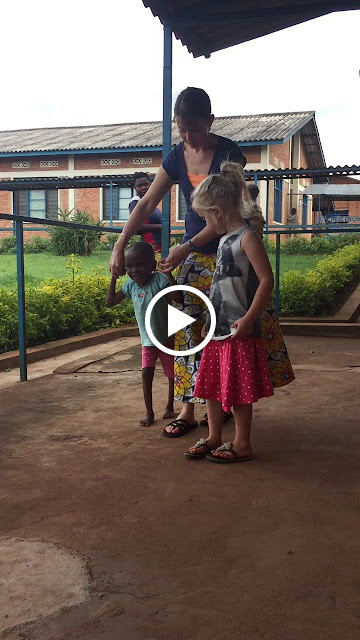 On April 12th, after so many months in our malnutrition service, Divine was discharged and Moise carried her home...we would later learn just how far he had to carry her!  Both Dr. Alyssa (our paediatrician) and I never had the chance to say goodbye to them before they left, so the  following weekend, the two of us along with my 10 year old son Micah, set off to try to find Moise, Divine and their home. 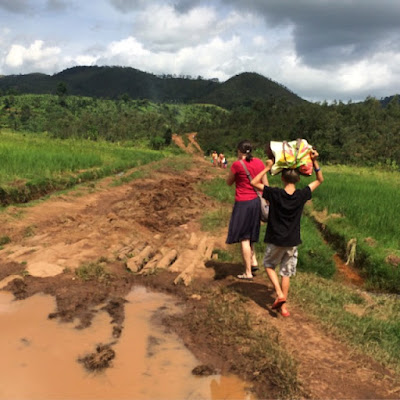 It took about an hour of driving, a few wrong turns, and then about another hour of hiking on little dirt trails following an old man with a machete before we found them. 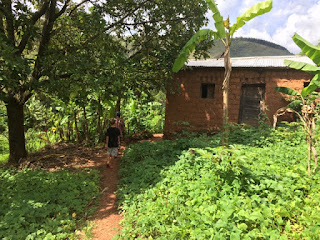 They were a little shocked - and honestly a bit scared - that a group of 3 bazungus (white people) just showed up at their home,  but after offering gifts of beans, rice, Busoma cereal and a soccer ball, they were much more receptive to us! 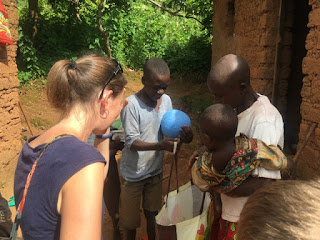 This family lives in unbelievably extreme poverty. Their house is made of home-made mud bricks, a grass roof, dirt floor, and that's about it. To a person walking by, you would say that they have nothing.  Absolutely nothing.  I would have totally thought this had I not gotten to know Moise and Divine.  What I learned is that while they are the poorest people I have ever met, they are rich in other things. 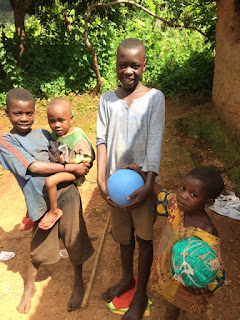 If I'm honest, it's hard to imagine anything for Divine other than a dismal life filled with a lot of suffering, pain and hunger.  However, I have to remind myself that our Father loves Divine so much more than Moise or anyone else does or ever could.  That pain, sickness, and poverty don't get the last word. That the sacrificial love that Moise showed for his sister, is merely a poor reflection of the divine love God has for little Divine, and for every single person on this earth. 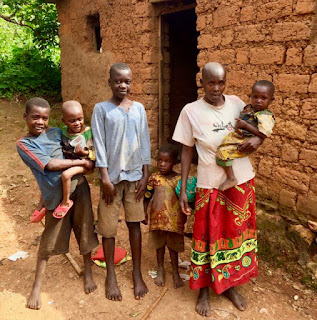 This is how we know what love is: Jesus Christ laid down his life for us.  And we ought to lay down our lives for our brothers {and little sisters}
1 John 3:16
Posted by George at 5:00 PM

This is a beautiful love story. What a privilege to get to witness it!

Wow. Thank you for writing this.

Love this...thank you for sharing. Praise the Lord and for this testimony of His goodness.