French Class for Beginners - with video!

Burundi is one of many francophone countries in Africa. French is the official national language, and therefore the language of Hope Africa University, the hospital, the exams given to medical students, and all other official work. Because a working knowledge of French is imperative to function in Burundi, all physicians (and families) went to language school in Albertville, France for 10 months before moving here. For some of us (Banks and Baskins), that was just last year so French is fresh on the minds of our children who attended the local French public school. Some of the older children here have been speaking French as long as they can remember so it is second nature to them. Others were babies or toddlers when their family was in France so they really weren’t speaking much of any language yet! So we have a wide variety of mastery of the French language at Kibuye Hope Academy.

We have divided the students into three French classes. Heather Fader teaches French II & III which focuses on conversation and grammar. I teach the beginning French class. Some children started the school year knowing how to count to ten, and maybe how to say “Bonjour!” But for the most part, we are starting from scratch. All students have French class everyday for half an hour, which is not enough to become fluent, but we hope to give the kids a solid base on which to build as they continue to be exposed to this beautiful language in Africa and around the world.

In my French I class, we try to have as much fun as we can! I find that vocabulary tends to stick better if they can use it in a game.

While learning the pieces of clothing, we played a silly dress up game where they got to tell each other (in French) what to wear and giggles abounded at the site of a small five year old trying to hold up adult sized pants or skirt.

While learning food and drinks, we turned the classroom into a little French restaurant and invited the class’s families to “dine”. The kids learned all the vocabulary, drew food on paper, cut out their pictures of each item, created the menu, learned how to say “what would you like?” After practicing on the French II Class, they were finally ready to serve their families – in French! 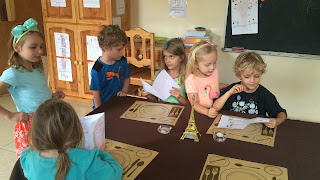 Thank you for your continued prayers for our children, for creativity in teaching in a resource-limited environment, and for language learning for the whole team! Merci beaucoup!
Posted by The Drs. McLaughlin at 2:33 AM

What a fun video! You're doing a great job with those kiddos :)

Love the video! what a great idea for celebrating progress! You have some cute students!!!