Ten-year-old Claver was admitted to our pediatrics service 2 1/2 weeks ago as a last resort. He had been previously hospitalized elsewhere where he was treated for malaria, bacterial infection, and severe anemia. But despite 6 blood transfusions, he continued to be severely anemic. In fact he seemed to have worsened bloody urine after each blood transfusion. The situation was made more dire by the fact that he had 2 sisters who died with the same symptoms - one at age 5 and the other at age 11. His father also has had similar symptoms intermittently in life (and ended up being hospitalized at another hospital while Claver was at ours). And the family lost one baby at birth, so Claver is the only remaining child.

Our initial physical exam revealed a very sick boy with difficulty breathing, extreme pallor, a large spleen (see picture below), and fever. He was barely conscious on admission. His initial hemoglobin level was 2.6 (normal is 12-14). 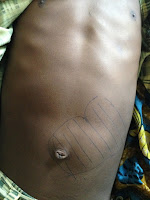 We kept transfusing him and he kept bleeding. Thankfully we had blood in our blood bank at the time - not always a given here. After a transfusion when he was more conscious, he would cry out, "I'm dying! I'm dying!" His mother cried often, too, seeing her suffering son and knowing he would likely die like his siblings. We added steroids in hopes that that would stop his body from destroying the needed red blood cells. I consulted a pediatric hematologist friend in the US who kindly sent an email to all her colleagues for help with this challenging case. They of course were used to much more information (lab tests, etc.) being available for an ICU case like this, but they rose to the challenge and helped us consider possible diagnoses and treatments. And they even looked at his blood smear slide which we sent back to the US with a visitor. After 4 transfusions, he was still losing a lot of blood and at that point we could no longer get an IV in him despite many attempts. A visiting surgeon came to the rescue and placed a central IV line - something very rarely done here.

After the fifth blood transfusion (at our hospital, 11th in total), he started to turn the corner. He stopped calling out that he was dying and he stopped hiding under the covers. He no longer looked deathly pale. He began to eat a bit and after a couple days started to sit up. We continued his treatment for pneumonia but we no longer needed to give him any blood. And today he happily went home - see him and his joyful mother in the picture below. His father also recovered and came to pick him up. We still don't have a clear diagnosis (probably a familial hemolytic anemia of some sort) and it's possible he could become ill with the same symptoms again, but we'll celebrate the victory today. I really cringed every morning I came into the hospital those first few days expecting to hear he had died in the night. But God saved him. These are the miracles to remember - the glimpses of what will come one day fully when there is no more sickness or death. 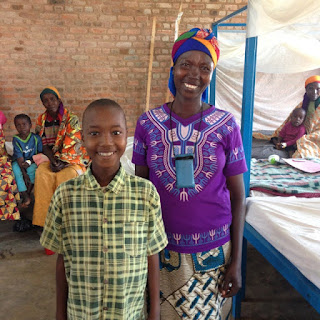 Such a gripping story! So grateful for God's healing touch on this dear family and your wisdom, resources and compassion!

Wow! Oh, that mama is jubilant!

Thanks for posting such a story! And thanks for giving of your talents to help others just like him. May God receive all the glory for the things you and your team have done in Burundi. Linda S.

God is using you for great things! Keep up the good work.
You mentioned the anemic boy was receiving malaria treatment... Any chance he has g6PD deficiency? You likely already know but certain antimalarials will precipitate a severe hemolytic anemia in pt with G6PD deficiency. We think we saw this several times in Chad and it's not an "uncommon" mutation in subsaharan Africa.
Blessings,
Mason