Falls of Beauty, Flash of Terror

It was a beautiful Sunday morning after church when our escapade began last weekend.  A group of us from Kibuye decided it would be a perfect day to confirm the existence of a set of hot springs and a mysterious waterfall a few of our teammates had supposedly visited a couple months back an hour south of the southern most source of the Nile.

The journey there was an adventure all in itself as it took us nearly 3.5 hours of searching beautiful hills and valleys in our team 4x4 on two tracks.  Let’s just say the road leading to the falls was a bit difficult to pin down on a map and had some questionable bridges along the way.  The thought did enter my mind that perhaps one of our devious teammates had sent us on a wild goose chase. 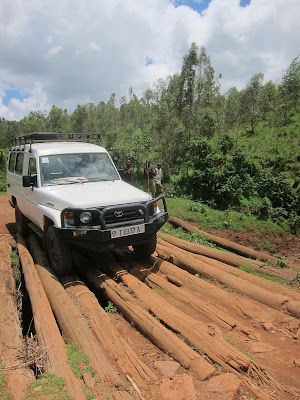 After nearly giving up several times, we did finally arrive at our destination.  We decided to head straight for the falls, a 10 minute hike from the hot springs into the mountains by foot.  There was a brief shower we had to wait out and then the sun came beaming through fluffy white clouds and brilliant blue skies. 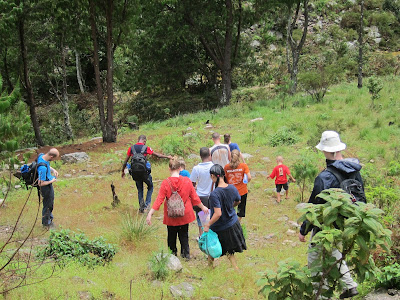 Just around a bend in the valley, our eyes were spoiled silly by the sight of a beautiful 300 foot waterfall tucked away in the side of the valley. 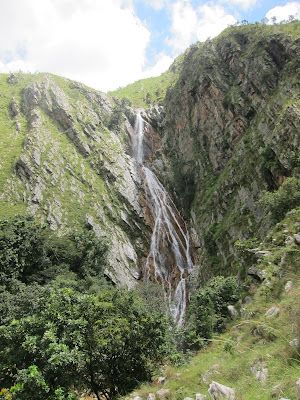 It was a perfect day.  I had our three kids with another nine adults pitching in for Jessica’s absence.


That’s a better than a 3-1 adult-kid ratio, so what could possibly go wrong? 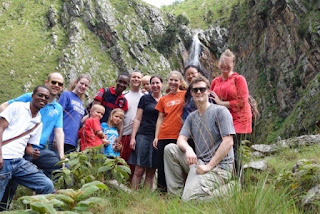 We enjoyed a picturesque picnic and a polar bear swim down at the foot of the falls.

That’s when our beautiful weather quickly changed.  An impressive tropical thunderstorm rolled over the mountain and we all huddled under the overhanging cliffs at the base of the falls as lightening flashed and the rains came down hard.  The shelter wasn’t great and we were all soaked to the bone by the cold, mountain rain,  but it didn't seem like a good idea to venture back out onto the bare face of the mountain given all the lightening.   As soon as the storm began to let up, one of our stellar interns, Lauren, wisely suggested we get going ASAP.  We agreed and began packing up our drenched picnic as the storm moved south.

Most of the team had now crossed the stream at the base of the waterfall and were headed up the edge of the gorge.  Mrs. Caitlin, Elise (my daughter) and I were still on a big, flat rock in the middle of the stream at the base of the falls where the picnic had taken place.  Caitlin was about to help Elise put her shoes on, and I had just finished closing up the picnic bags which also had our valuables inside (wallet, 4x4 keys, dry clothes for kids etc) when we heard it — a deep rumble like a freight train coming towards us up in the mountains.  We immediately knew our lives were in grave danger.

I screamed “GET OUT!!!  GET OUT!!!”  As I peered back above my shoulder, I saw a roaring mass of water descending upon us from on high.  I won’t tell you what my next word was.  As there was no option for escape, I felt frozen as my mind futilely analyzed the best course of action.  In reality, it was less than a two second pause per a teammate who was watching this all take place before his eyes from the gorge's edge higher up.

I snatched up Elise into my arms and jumped off our rock into the stream in what was looking to be a futile attempt to reach high ground before we were crushed by the power of a flash flood coming straight at us off a massive mountain.  I thought it was the end for us.

I’m not really sure when the torrent hit us.  All I remember is my brain telling my legs to sprint as fast as they could to save my daughter’s life, but instead of sprinting, all they did was slip and stumble with Elise’s head going under water again and again as I tried to keep us upright and make progress to the steep bank of the gorge as the flood waters whisked us away.  As Elise first recounted it, "Daddy pushed me off the rock and then kept dunking me under water."

Miraculously, we did make it to the bank.  I threw Elise up into the vegetation as high as I could and yelled at her “CLIMB, CLIMB, CLIMB!!!”  Climb she did, like a mountain goat.  As I attempted to get out myself, she scampered up the steep slope and didn’t stop.  As I crawled/climbed to the footpath via our "shortcut", all I could think about was, “Where are my boys”?  But by now Elise was continuing her rapid summit of the mountain and I had to stop her, so I could search for the boys.  I yelled “STOP ELISE!” over and over until she finally turned around and saw me yelling for her over the deafening roar of the falls.

As I attempted to gather myself to find the boys, someone shouted to me from further down the path that the boys were safe.  I collapsed face down on the spot.  As I neared passing out with relief that the kids were safe, someone yelled up the path to me to come right away, “Katie is stuck in the river.  We need your help!”  My head was spinning and my hearing was going in and out, but I scrambled to my feet and struggled down the path back to the raging water’s edge.

There was poor Katie, center stream, clinging to a boulder at the brink of being overtaken by the unpredictable torrent.  The pounding mists of the falls lashed at her relentlessly.  She was only about fifteen feet from us, but any attempt to enter the water would have been rewarded with certain disaster.  Gad, her valiant husband, began accosting nearby trees with his bare hands and a rock in order to try to reach her from the bank with a tree trunk.  While he did successfully bludgeon down several, they were not sufficient to attempt a safe rescue.

We were helpless to save her.  So we prayed.  We prayed the flood waters would let up rather than intensify.  The other ladies maintained eye contact with Katie nearly the entire time and tried to keep us guys from attempting something foolish.  Note, my kids were appropriately "crying their brains out" (per Micah as he initially thought Daddy and Elise had died and now all feared for the life of Mrs. Caitlin).   Thanks to everyone who hugged, consoled and prayed with them as we sought a way to reach Caitlin.

The rains stopped, and we felt time might be on our side for the moment, but we couldn’t know for sure.  We had a contingency plan to attempt a rescue by bending down a branch of an overhanging tree with our body weight if things deteriorated rapidly.

After thirty minutes of extreme intensity pouring over every possible way to rescue Caitlin, we felt the waters were letting up a bit.  One of our visitors, Hans Peter, convinced us to let him attempt a rescue by fording the stream about thirty feet up-stream from Katie using a vine hanging down from a tree as his safety cord.  It worked and he was able to bring Katie to the bank retracing the same route.

At this point, everyone was out of immediate danger, but now we had to get to shelter.  That was complicated by the fact that the flash flood now lay between us and our vehicle, and the keys had been swept downstream as I had to let go of the picnic bags in order to have any attempt at survival.  In the mean time, we did successfully get a call out for help.  So the brothers Fader were on their way from Kibuye with warm clothes and the spare set of 4x4 keys.

Given there was a sharp bend in the river downstream in the valley, we decided to send out our two visiting eye docs on a recovery expedition, but with little to no hope.  Long story short, these eagle scouts not only found the 4x4 keys and my wallet, but several other Cropsey articles of clothing strung along bushes at the high water mark including Elise’s “favorite” shirt.

As the waters receded and another storm began to threaten, we successfully forded the once tiny stream using a human chain and booked it to the 4x4.  After being in the cold water, rain and wind, it felt so good to get inside as the rain began to fall again.

There was much rejoicing and thanksgiving as we headed for home and met up with the Fader brothers 15 minutes into the journey.  The adventure didn’t end quite so quick however as our rescuer’s vehicle broke down briefly on the way out and then we came upon the scene of a head-on accident between a motorcycle and a pick-up truck.

We were so glad to arrive home just 30 minutes after nightfall.  Everyone was alive and well with a few of us nursing some nice cuts and bruises from our ride in the flash flood.  Our prayers had been answered.


Posted by John and Jessica Cropsey at 7:44 PM

Wow! I felt like I was reading an adventure novel, but this really happened! I'm praising for everyone's well-being! This will certainly be an "Ebenezer" moment you will recount for years to come!

Thanking God for his protection of you all.

number of fatalities can vary dramatically with weather conditions from year to year, the US national 30-year average for flood deaths is 127

Praise God you all are ok!!

Legions of angels! Praise the Lord!

Praising God and giving thanks for your safe return home.

Praise the Lord for His guidance and protection!!!

There is nothing worse than that feeling when your child's life is in immediate danger--I have never experienced anything close to this though. I can only imagine!

Wow! Amazing experience and story. I put my book and my baby down and read your harrowing account from the safety of my couch. Grateful it was a happy ending and that God was looking out for you all. Thank you for sharing your stories.