Well, it appears to be "shoebox" season again.  Our team is obviously closely connected to Samaritan's Purse, and as part of our Post Resident Orientation we DID get a tour of the OCC headquarters, but my history with the shoeboxes goes back to college.

One of the campus ministries I was a part of in the Twin Cities took an evening in December back in 1999 and volunteered at a SP collection center.  Inside the warehouse, there were thousands and thousands of donated shoeboxes ready for reviewing and packaging.  My job was to open each box, make sure that there were no inappropriate items inside, and then send it down the conveyor belt for packaging.  It was fun to see what people placed inside their boxes and imagine the look on a kid's face when they received one of the first gifts of their lives.

Fast forward 15 years.  I don't think OCC has ever delivered to our region of Burundi, but hopefully someday.  As I look around at all the Burundian children here at Kibuye, I am always struck by how little they have.  Toys are literally sticks and bits of trash.  Alyssa tried to do a developmental evaluation of kids and realized that no kid under school age knows how to hold a pencil because they don't have any.  No crayons, no markers, no pencils.

So with that in mind, I thought I'd compile a brief list of things that I think would be awesome gifts to include in your shoebox this year. 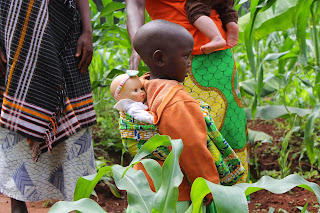 1.  Baby dolls (for girls).  I had no idea the kind of uproar that Maggie's Baby June doll would create when we took it out of the house for the first time.  The local kids loved it.  Toby's babysitter loved it.  I took it up to the hospital to use as a delivery model and everyone stared and wanted to touch it, including the nurses (one took it and I wasn't convinced she was going to give it back!)  It seems like no one here has ever seen such a thing.  So, girls of all ages would love a little doll, bonus points for dark skin.

2.  Matchbox cars (for boys).  Small, fun, hours of entertainment.  We would pass these out at Tenwek sometimes and kids confined to their beds would run the cars all over the bed for hours at a time.

3.  Crayons and paper/coloring books (see the above comment on holding pencils).

4.  Picture books.  I wouldn't have thought of this one before, since most books are in English and most kids in the shoebox distribution areas don't speak English.  But again, when a kid has nothing, no books in ANY language, picture books can be an amazing past time.  For example, we bring the Jesus Storybook Bible to church many weeks and draw a crowd of kids every time we open it.  The pictures are beautiful, there are tons of them, they tell the story of Jesus, even without understanding the words.  And the JSB isn't that expensive, less than $20 on amazon.

For more info on the OCC program, check out www.samaritanspurse.org
Posted by The Drs. McLaughlin at 10:32 PM

Great ideas, thanks. I might suggest Crayola Twistables instead of crayons and pencils, because they won't melt, and don't need to be sharpened. I had no idea they had no experience with dolls...amazing!

Love this!!! We are packing shoeboxes tomorrow & this is super helpful! I remember driving through Burundi last summer & seeing bikers carrying huge cardboard boxes that said "Samaritan's Purse Operation Christmas Child" …. that will forever be in my memory :)

Thank you! We are packing ours this week!

Thanks for the great ideas! We're packing our shoeboxes this week.