While Rachel and Heather have been getting their hair cut by their spouses for the entirety of their marriage, I have held on to the luxury of getting my hair done by a professional.  In Kenya, there were enough mzungus (white people) in the country to supply plenty of experience and business for multiple hairdressers throughout Nairobi who were accustomed to our tresses.  Last year in the States, I reconciled myself to the fact that it is highly likely that John will need to become my professional hairdresser in Burundi.  So, he accompanied me on my last U.S. haircut in August.  We explained our situation to Diane and she happily agreed to schedule a longer session for us, instructing us on what she was doing each step of the way.  We arrived armed with our camera, ready to video everything for future reference.  Unfortunately, our memory card was nearly full, so we had to settle for snapshots instead. 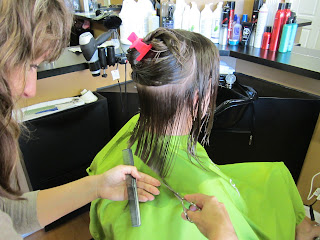 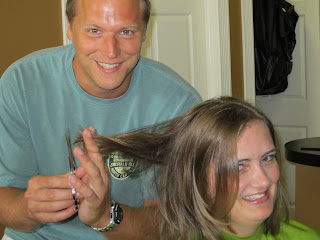 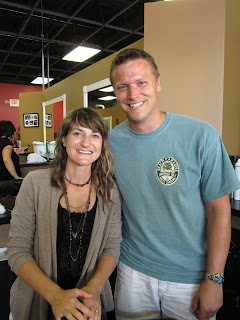 That was 4 months ago.  Now we are in France and I am in desperate need of a trim.  Of course, there are plenty of "coiffeurs" around here, yet someone wisely advised me to let John get some practice here so that at least there would be someone to fix things if necessary.

Last night, with some fear and trepidation on both our parts, we took the plunge.  You have to remember that John is a microsurgeon, which means that he is a perfectionist and also has a keen eye for detail (with certain things).  I took some comfort in this fact.  We set up the computer with our pictures and began.  I decided to play some "Blitz" on my i-Pad.  (I equate this to a certain someone I know who chooses to read while her husband drives.)  I started to get more nervous as the tedious process of John figuring out how to layer wore on.  There was a lot of hair on the floor and I was hearing comments like, "Disaster--get outta here!", "I just don't understand how you get rid of this hair without making a mess of everything!".  Nearly TWO HOURS later (after I had earned enough coins on Blitz to buy some really great bonus features), I was examining the final product and made a comment about a particular section that was a tad uneven.  John replied with, "Well, you don't want the Dumb and Dumber look, do you?  It's kind of nice to have it a little uneven."

I am happy to report that there doesn't appear to be any reason to visit a French hairdresser.  John told me this morning that he's actually looking forward to the next one.  Since he isn't practicing ophthalmology this year, I guess this is a good way for him to keep up his surgical skills to some extent!  Thanks, Diane, for teaching him so well and thanks John for caring enough to spend two hours of your evening to give me, as you would say, "a perfect layer of natural beauty". 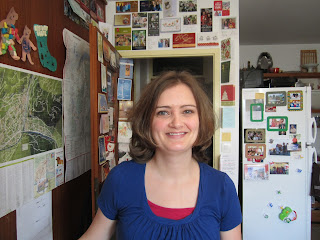 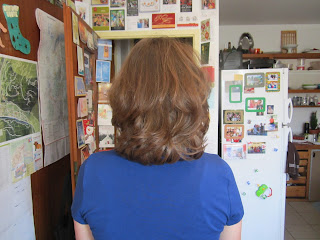 Posted by John and Jessica Cropsey at 1:48 PM

No way! John did an amazing job!!! Just pretend you're at Aveda! And settle in for your two-hour haircut.

This is so fun and funny! He did a fabulous job and you are as beautiful as ever!! :)

Oh my gosh!! This made my day! He did a great cut. I'm very proud! Haha. You guys are awesome, that was so much fun. It looks like I had an attentive student, A+ John!

BUT did you get a shampoo and scalp massage with your cut? Be sure to schedule that part next time. :)

John, You are THE MAN! Very impressive, maybe you have discovered your true gift. Kinda like the old days of Barber/Surgeon :)

Magnific! (Loosely translated that's French for what a great haircut I think). John your Barbarian skills are awesome. Though as you know surgeons used to be barbers on the side so I guess it's no surprise

Excellent story and cut! Way to go, both of you! Maia and Steve

I was laughing as I read your entire post. Next time, you need to set up the whole works. Can John bring you a nice drink and magazine to read while we works? Can't wait to visit in March!