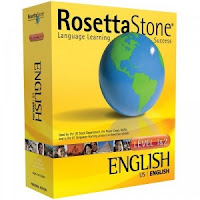 With a little more free time than previously or later, we have spent part of the last couple weeks dipping our feet further into the world of language learning for Swahili. Our prior Swahili exposure having been limited to The Lion King, "Jambo Means Hello" (the Caldecott-winning kids book), and a few rocky games of Settlers of Kisumu, we had a lot of work to do.

Through some generosity on the part of Samaritan's Purse, we picked up a copy of Rosetta Stone Kiswahli. It's been an interesting experience working with it, and multiple people have asked us what we thought of the program, saying that they themselves had considered it for some language or another. So we thought we'd share a few thoughts.

First, it is entirely in Swahili, meaning that if your primary language was Norwegian, you would find this program just as navigable as us. Which is good, I guess. Nothing like immersion to speed the language learning.

Second, their entire philosophy (per the video ad on their website) is that they are trying to mimic your learning of your first language, as in, when you were Maggie's age. There is no discussion of syntax, pronunciation, or even the alphabet. There is simply hearing words, and trying to pick out the image or object that it describes. And this, of course, then builds on itself. It's fascinating, really.

Third, the entire process is like a super-extended version of the old "Sesame Street" game "One of these things is not like the other". See below.

Thus, after 17 lessons, we don't know how to say "hello", "my name is", "good", "bad", or "where is the toilet?". But I have mastered "Mwanamume amevaa kofia mbili." The man wears two hats. We're trusting that the more applicable stuff comes later, but are still puzzled as to how some of the necessary terms above will be depicted in purely pictorial form.

So, the upsides are that it's user friendly, it's completely in Swahili, and the format makes it kind of like a game, so you never get bored or disengaged. As to whether it's effective, we'll have to wait to find out.
Posted by The Drs. McLaughlin at 7:36 PM

If I can be so bold as to advise: try to finish it all. I only got through half before coming here, and it's so much harder to do the lessons once you arrive. Some of the stuff is irrelevant, but it lays a good foundation for learning here.

To the Mc protion of the Mccropders. I heard you today at Valley and I was so encouraged by your mission. I will be following and praying for all of you. As you stood there, I just wanted to yell out "Jumbo, ah barrri yako" (that's phoenetic, don't know how to spell it.) It's the only Swahili that I remember.

Peace to you all,
Mia K

"Jambo mean hello." That is good to know. For my birthday I'll be getting a game called "Jambo." It's about an African market. I'm certain it will be just like a real market.

I am teaching my students how to say the numbers 1-10 in Swahili (I'm learning right along with them). I've enjoyed showing them some of your pictures and articles as we study Kenya!

Well, just for what it's worth. When I used Rosetta Stone Russian, everyone commented that my accent improved and that my vocabulary grew. As far as grammar and the like... you learn it, but you don't know you're learning it. I like knowing.