A few pertinent facts, to try and flesh out a profile for the place we're moving to: 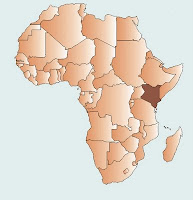 2007 Violence:
"KIBAKI's reelection in December 2007 brought charges of vote rigging from ODM candidate Raila ODINGA and unleashed two months of violence in which as many as 1,500 people died. UN-sponsored talks in late February produced a powersharing accord bringing ODINGA into the government in the restored position of prime minister."

Email ThisBlogThis!Share to TwitterShare to FacebookShare to Pinterest
Labels: Kenya